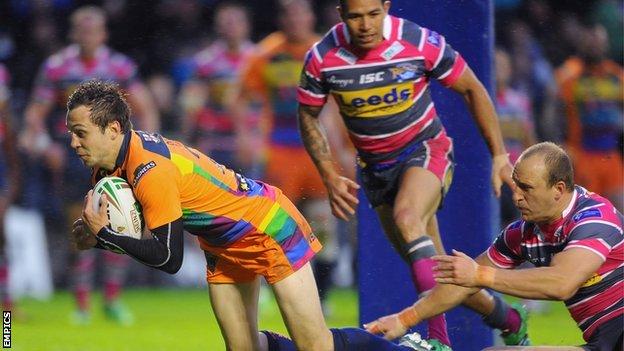 Warrington kept up the pressure on leaders Wigan at the top of Super League as they unleashed a stunning first-half try blitz on Leeds.

After Trent Waterhouse's opener inside 45 seconds, Chris Riley and Gareth O'Brien scored twice as Wire stunned the champions to open up a 30-0 lead.

But Kevin Sinfield got one back prior to the break before Rob Burrow went over twice in the second half.

And it took a Ryan Atkins try and Lee Briers drop goal to seal victory.

After shipping 50 points at home to leaders Wigan last weekend, it was a second heavy defeat in seven days for Leeds.

Both sides were on the back of disappointing defeats, Wire, clad in garish orange, making just one change following their narrow 23-22 defeat at Hull KR.

But Leeds were missing the injured Danny McGuire and Lee Smith from the side humbled 50-8 at home by Wigan, so there was a start for Burrow at scrum-half and Ben Jones-Bishop was recalled on the wing.

In sweeping rain and a howling wind, the Wolves could not have made a better start, Atkins's superb pass releasing Riley, whose kick ahead deflected into the hands of Waterhouse, who dived over.

Three minutes later, Briers and Brett Hodgson, who kicked six goals, combined to send Riley over in the corner. And, on 10 minutes, a superb kick from Briers was pounced upon by O'Brien for his side's third try.

Nothing was going right for the Rhinos, who lost full-back Brent Webb with a leg injury, while hooker Shaun Lunt had a try ruled out as he lost possession attempting to touch down.

Instead, Warrington increased their lead on 18 minutes when another superb reverse kick from Briers was touched down by O'Brien for his second try of the night.

The relentless onslaught continued when Riley sent O'Brien clear and then followed up his half-back to take a pass and race clear for a thrilling 80-metre score.

But Leeds finally got on the scoreboard six minutes before half-time when a quick dart by Burrow allowed Sinfield to crash over. And the visitors scored again six minutes after the restart when Burrow ducked his way through a couple of weak tackles.

The Rhinos suffered another injury blow when Ian Kirke was carried off on a stretcher following a ferocious challenge from Wolves forward Ben Westwood.

A Briers drop goal then edged Warrington out to 31-12 before Leeds claimed their third try of the night through Burrow, but Atkins had the final word nine minutes from time.

Victory came at a cost for Warrington, who lost full-back Brett Hodgson with a hamstring scare after the break, but coach Tony Smith expects him to be fit for next weekend's England-Exiles game.

"It was pleasing to get a start like we did against a very good team and our defence was terrific as well.

"We didn't manage the game very well the previous week and, in the second half, there were probably a few skeletons that we were still trying to get rid of and we became over-anxious.

"Brett feels quite confident he is going to be fine for next weekend. He didn't pull anything. He just tightened his hamstring so, as soon as we heard that, we got him off.

"What we did in that first 30 minutes was something to watch. Warrington looked too big and too strong, faster than us, and that is something we need to get on top of.

"We had a tough week last week and it will be another tough week this week.

"But you can look at the last 50 minutes of that game and take something from it. We showed resilience and a bit of steel to repel them away from our try line, but over the game you wonder if that was a reaction to what we did in the first 30 minutes.

"Sometimes it is easy for Rob Burrow to do what he did when we have the momentum, but it takes a special kind of player to do that when we don't. And I'd like to be saying that about a few more."