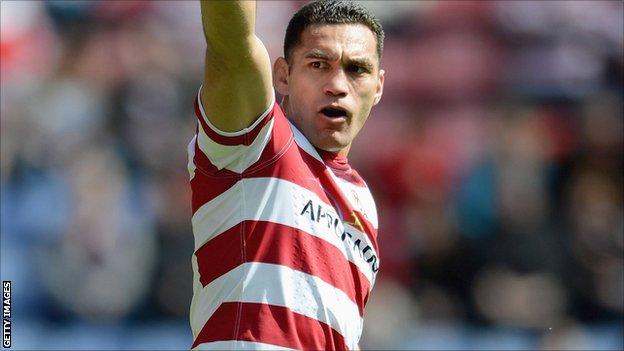 Super League leaders Wigan stretched their lead on top with a seven-try win over Catalan Dragons in Montpellier.

George Carmont added two tries for Wigan after the break to stretch their lead but a quickly-taken tap penalty by Scott Dureau gave the hosts hope.

Sam Tomkins and Jack Hughes sealed it with two tries in the dying stages.

However, the result was much closer than the scoreline suggests, the home side having been on the wrong end of some poor refereeing decisions.

The main contentious decision came just before half-time when Charnley appeared to score a try despite his elbow being in touch.

Despite a video referee being available to James Child, the referee opted to give the try without assistance.

It was the Catalans' first defeat at home this season as Wigan continued their impressive form with a ninth successive league victory.

That restored their three-points cushion over second-placed Warrington.

Despite their 12th win on the trot, victory did not come without a cost, prop Gil Dudson, sinbinned early on, being stretchered off just after the hour with a serious-looking ankle injury.

"The small points or small plays whether it was in attack, finishing off a break or executing a play, some of the opportunities we created probably would have been tries earlier in the year.

"We just needed that extra person in support, or a change of direction or extra bit of speed that would have got us over the line.

"But they turned up today and that is their strength and that is why they are where they are."

"I'm very happy. We've come through a block of six games playing Leeds and St Helens twice and we identified this game in pre-season as a tough one - and to come through winning every game is fantastic.

"We scored some great tries today and I'm a happy man, looking forward to a glass of wine tonight.

"I'm happy with the performance, with the ball in hand we had a lot of composure, our completions were about 94%.

"In a game like that against a team as good as Catalan I think that is massive for our team."