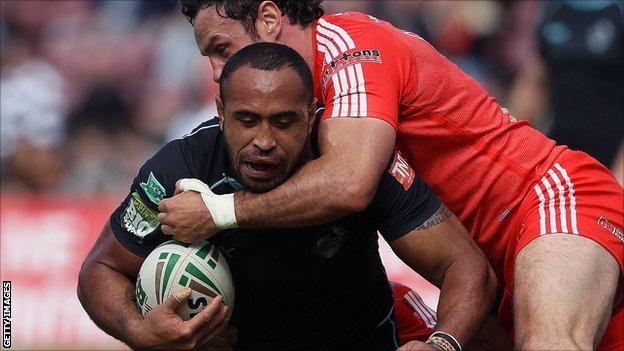 The pair were level at the break with tries from Craig Gower and Omari Caro cancelling out efforts from Widnes duo Cameron Phelps and Frankie Winterstein.

It was then all-square at 18-18 with Broncos centre Tony Clubb cancelling out a further effort from Phelps.

Winterstein and Daniel Sarginson traded late tries but Kaufusi crossed in the dying seconds to seal the victory.

The result means the Broncos leapfrog the Vikings in the table while Widnes, who were hoping to record back-to-back victories for the first time this season, return to the foot of Super League.

The visitors made the brighter start, Phelps racing clear to touch down after a delayed pass from Jon Clarke with barely three minutes on the clock.

But a succession of penalties soon put Widnes on the back foot, and the Londoners profited when Gower charged over from close range to bring the teams level.

London took the lead with wing Caro crossing in the corner but, as has so often been the case this season, the Broncos were unable to take that lead into half-time, Winterstein muscling over to bring the sides level right on the hooter.

And things got even better for the visitors moments after the interval when Phelps took advantage of Gower's slip to race through for his second try and push Widnes back into a six-point lead.

London were quick to answer that though, Clubb bulldozing through to level things up on 48 minutes.

But as the chances went begging the Vikings rallied themselves, and then showed London how it should be done when Winterstein crashed over for his second. Patrick Ah Van maintained his 100% record with the boot in the game with the conversion attempt to push the visitors 24-18 ahead.

Back came the Broncos, Sarginson setting up a grandstand finish when he wriggled over with seven minutes to play, only for Shane Rodney, who had added the extras to the previous three tries, to hit the post with his conversion attempt.

The game looked up but Kaufusi changed all that, with Kieran Dixon adding the extras to seal a narrow win.

"It is really great to be able to focus on something positive rather than negative.

"I thought the way we came back at the end said a lot about our spirit and resolve.

"This win really should be a big thing for us.

"It is the type of thing that galvanises a group, and to see the players jumping and celebrating at the end said a lot.

"I hope that helps build the chemistry of the squad and we can take that forward."

"We have to stay philosophical about it.

"I thought we did enough to deserve something from the game, although we did have to spend a lot of our time defending and that took a lot of energy out of us.

"I'm really disappointed as this was a great opportunity to push ourselves away from the foot of the table and we have not taken it."