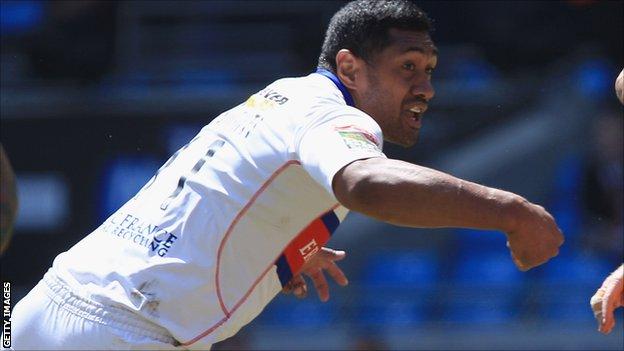 Hull led at the break with tries from Willie Manu, Brett Seymour and Ben Crooks, with Wakefield responding through Dean Collis and Peter Fox.

Hull led going into the last 10 minutes but Lauitiiti crossed to win it.

It took a moment of magic from second-row Manu to finally break the deadlock for Hull.

Tickle's conversion and penalty minutes later put Hull eight points clear and their advantage was stretched to 14 points when Seymour strolled through the Wakefield defence to score.

Collis touched down in the corner to give Wakefield a way back into the game.

Hull hit straight back through teenage winger Crooks, but it was Wakefield who finished the half the stronger - and winger Fox broke free, racing 40 metres to score under the posts.

Wakefield found themselves trailing by 20 points after a quick-fire double for Hull centre Yeaman.

But they again came back, with Sykes taking advantage after a deflected kick to score.

Former Hull player Washbrook shrugged off a tackle by Seymour to score, before a remarkable 10-minute period was capped when Amor powered his way under the Hull posts.

Hull were out on their feet and, after continuing to press, Wakefield got their reward when Sykes sent Lauitiiti over to give them the lead for the first time with seven minutes remaining.

A nervous finish ensued but, with Hull unable to get their hands on the ball, Wakefield held on for a memorable victory.

"We believed at half-time if we could fix up a few things we could get back in the game, but the way we started the second half and conceded two tries we knew if we didn't score next we could be in a spot of bother.

"If we could score next we were happy with the way we were travelling and we knew they'd had a couple of weeks where they had not held on to leads.

"We felt if we could put them in a position where they were under pressure a little bit of doubt would creep in.

"I want to shower our players with praise about their never-say-die attitude and the way they kept playing and playing. We grew in strength and played the last half an hour really tough."

"There is a lot of work to be done in a lot of areas.

"The big lead we had smothered over a lot of things Wakefield were doing well and I was never comfortable being up by 20 points because I could see the cracks in us.

"We have lost our attitude in defence. Our discipline was poor and our kicking game was atrocious.

"We couldn't absorb any of the pressure they were building and we were poor in a lot of areas."