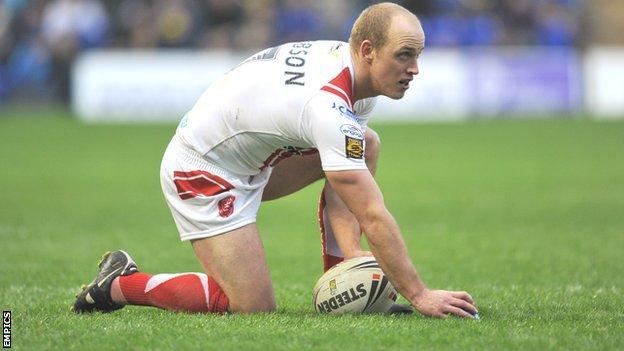 Michael Dobson helped himself to an individual 24-point haul as Hull KR breezed to a fourth straight victory.

Dobson ran in two of his side's seven tries, made four of them and kicked eight out of nine attempts at goal.

It was a fifth successive defeat for a Huddersfield side now in freefall following the revelation that they are to lose not only their coach Nathan Brown, to St Helens, but also their captain Kevin Brown, to Widnes, at the end of the season.

Yet, after Hodgson took just three minutes to score on his first return to the Galpharm, converted by Dobson, the Giants quickly levelled.

Cudjoe's eighth-minute try was then followed by Eorl Crabtree using all his strength to bulldoze his way on 24 minutes. And Danny Brough converted both for a 12-6 lead.

But Rovers were ahead by the break - never to be caught again as they completed a double over a Huddersfield side who let slip an even bigger lead, 18-0, when they in March.

Stats from the Galpharm

Dobson slipped two tackles to score the Robins' second try. And, after he had kicked a goal to level, he then executed a clever grubber kick which bounced kindly for Welham's outstretched fingers, with the benefit of the doubt from the video referee, to just about apply the finishing touch.

Having gone in 18-12 at the break, that lead was extended when Galea scored under the posts, Dobson adding the extras.

Dobson then kicked a second penalty on 52 minutes to put his side three scores ahead before Hodgson crossed for his second try five minutes later to put the result beyond doubt.

Huddersfield pulled a try back through centre Murphy but Dobson forced his way over for his second after Hall had set up the position with a 60-metre run.

With the game opening up in the final quarter, Huddersfield claimed consolation tries through Murphy and Patrick but the visitors had the final say when Hall burst through for his side's seventh try.

"At 12-6, we looked like a decent team. We were going well and were definitely on top.

"But we're like the person who wants to get rich quick. We think we've got to score every time, we don't build any momentum or pressure.

"It's quite obvious our right edge is struggling defensively and they're very strong down that side with Dobson, Benny Galea and Kris Welham. Apart from Wigan, they're the form team of the competition at the moment."

"I thought Michael Dobson was outstanding. He's doing everything well. He should be playing in the NRL, he's that good a player, and I'm lucky to have him. He's the form half-back in the competition. The last month he's taken his game to another level.

"Our skipper Ben Galea was really good tonight. He wasn't feeling the best before the game so for him to come out and produce a game like that is credit to him. It's a reason why he's lasted so long in the game.

"The platform was our defence. They put some real heat on us and we withstood it and scored some really classy tries."