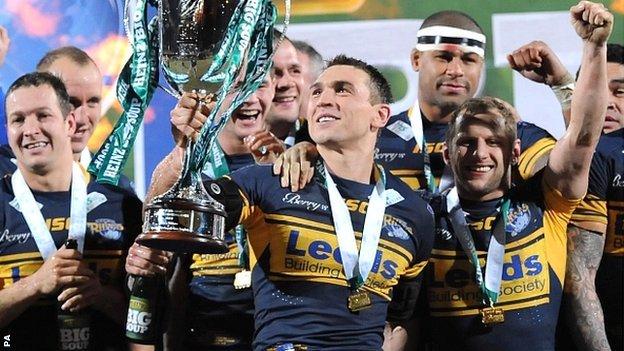 Hetherington was critical of the side after their 50-8 defeat by Wigan Warriors on Friday.

"They're the most successful group we've had in our history and many are legends," he told BBC Radio Leeds.

"All good things come to an end though, that's the crossroads we're at and that's where decisions and judgements need to be made."

The Rhinos, who won Super League last season after finishing fifth in the regular campaign, are currently ninth with 12 games remaining.

Hetherington is cautious about making major changes to the playing personnel.

"All the fans are asking if the team is ready for a major overhaul for next year and that's a question we had to ask this time last year," he added.

"We kept things as they were and we went on to win Super League and the World Club Challenge.

"It's all too easy to make change but it can be for the worse. Over the course of the next few weeks and months we'll decide what's best to do."

Despite the recent struggles that have seem the team fall 10 points behind current league leaders Wigan, Hetherington is confident the Headingley side are still capable of challenging for major honours this season.

"Our aims are to win the Challenge Cup and Super League," he said.

"We're in the semi-finals of the Challenge Cup against Wigan in seven weeks and that's enough time to turn it around.

"We believe we're capable of finishing this season strongly, as we did last year. We have the talent, the hunger and ability within the squad, that just needs to manifest itself in the performances."