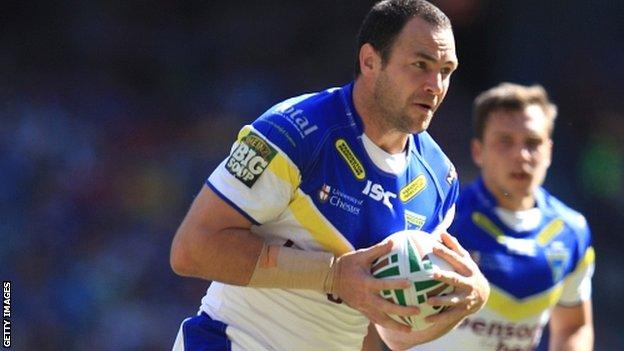 Great Britain's most-capped player Adrian Morley has been left out of the England squad for the fixtures against the Exiles on 16 June and 4 July.

The 35-year-old has featured regularly during coach Steve McNamara's reign.

Wigan's Gareth Hock returns to the squad for the first time since his drugs ban, and also included is former Scotland international Danny Brough.

Danny Tickle and Ryan Atkins, who were not part of McNamara's England Elite Training Squad, were also called up.

"While McNamara insists the international door remains open for the 35-year-old prop, my fear would be that the door is creaking shut"

McNamara stressed that being left out of this squad did not necessarily represent the end of Morley's international career.

"There is no bigger advocate of Adrian than me," he said. "But he's just coming back from a bad injury and I believe there are players ahead of him in terms of form. Adrian I'm sure will come bouncing back.

"For the other players that have missed out, the door is still open and it is important they continue to work hard in the domestic competition with a view to getting back in the squad," he said.

"It is a pleasing situation to be in. We have competition for places right across the team and every player knows they have to perform week in, week out if they are going to be part of the England programme."

Brough, a former plumber who has captained Scotland but opted for England last year only to suffer an ankle ligament injury on the eve of the inaugural fixture with the Exiles, is one of four potential debutants.

Carl Ablett of Leeds, and Wigan's Josh Charnley and Lee Mossop are other players hoping for their first caps.