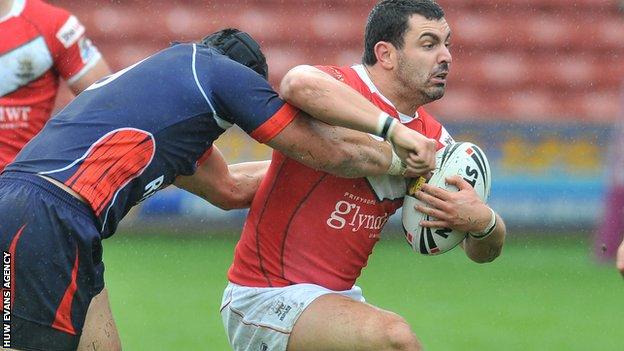 Rhys Williams' two tries were not enough as Wales fell to defeat against France at Wrexham's Racecourse.

David James also scored a try for the hosts but it was the visitors who ran out winners with five tries.

The Welsh had six youngsters making their debut in the absence of five regulars through injury, in addition to their Australia-based players, whereas the French were able to call on six regulars from Catalan Dragons.

Wales enjoyed a promising opening but the danger signs were there when scrum-half William Barthau wriggled over the line only for referee James Child to disallow the try for a knock-on.

The opening score came on 15 minutes with full-back Stacul taking Thomas Bosc's inside pass to glide over for the first of his two tries.

Bosc added the goal and the visitors dominated the rest of the first half without being able to fully make their pressure count.

Second rower Antoni Maria was held up on his back over the line and winger Jeremy Guiraud was brought back for a forward pass before loose forward Gregory Mounis took Barthau's defence-splitting pass and wrong-footed full-back David James to score his side's second try eight minutes before the interval.

Wales grabbed a foothold in the game on the stroke of half-time when they worked the ball out to the left and Williams, currently on loan at Castleford from Warrington, took James' pass to go over for his first try.

It was the winger's 12th international try to equal the previous record held by coach Iestyn Harris.

That buoyed the home side, who made an impressive start to the second half but second rower Andy Bracek's clean break petered out and centre Christian Roets was ruled offside when he touched down Danny Jones' kick to the line.

France re-asserted their dominance when prop Mathieu Griffi burst through for two tries in seven minutes, the second after a superb break by his fellow front rower Mickael Simon.

In between Griffi's double the impressive James scythed through the visitors defence for a deserved try and then combined with Roets to get Williams over forhis record-breaking score.

Jones converted both second-half tries to make it 22-16 but the French made sure of the victory when skipper Oliver Elima broke clear and Bosc sent Stacul over for his second try of the match and Bosc kicked his fourth goal.

Wales head coach Iestyn Harris: "We're disappointed because it's a Test match we feel could have won but therewere massive positives for the future of Welsh rugby league.

"There were a lot of guys unavailable who will be available at the end of the year but the young guys stood up and showed they're ready for international rugby.

"We're on a journey to the World Cup and beyond and I think we're in a pretty good state.

"If you take Jordan James and Christian Roet out, everyone is under the age of 25 and we had some 17 and 18-year-olds who stood up well against an experienced French side."