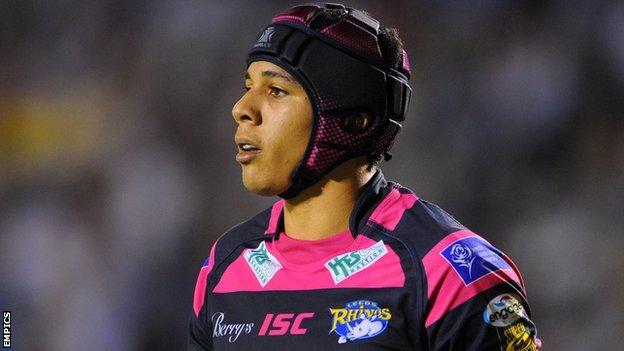 Kevin Sinfield's 16 points with the boot proved the difference against Trinity, who also scored seven tries.

Having started the night in ninth, Leeds' victory, in a game rearranged due to the Rhinos' World Club Challenge distraction in February, lifted them back into the top eight.

Leeds fielded 10 players who had been on international duty just 48 hours earlier. But Brian McDermott's much-maligned men, who had last four out of their last five league games, made a rampant start.

They carved a 12-0 lead inside the first 10 minutes with tries from Hardaker and Jones-Bishop, both converted by Sinfield.

Three Wakefield tries in seven minutes from Cockayne, Smith and Collis soon turned that round, all improved by Paul Sykes to edge the visitors ahead 18-12.

Jones-Buchanan then crossed, Sinfield again adding the extras to tie it up at 18-18.

But there were still two more scores before the interval, Leeds old boy Lauitiiti's converted try putting the Wildcats back in front, only for Jones-Bishop to grab his second of the night.

Wakefield then restored their lead early in the second half through Trout, Sykes again converting.

But, from 30-24 down, Leeds showed the character to come back and win.

Hauraki took just three minutes to level with a converted score before Jones-Bishop, only starting because of the injury to Brent Webb, raced in to complete his treble.

Sinfield kicked that and a 65th-minute penalty, awarded for dissent after the Wildcats complained about a decision to award a scrum feed to the Rhinos, to earn an eight-point cushion.

That safety buffer looked necessary when Wilkes scored Wakefield's sixth try, Sykes making it six out of six with the boot to pull it back to 38-36 with still 10 minutes left on the clock.

And, even when Ablett's 74th-minute try looked to have proved the clincher, the Wildcats were not finished.

After Sinfield's eighth successful kick of the evening had put his side 44-36 up, there was still time for winger Fox to add Wakefield's seventh try.

But Sykes, who also enjoyed a 100% record with the boot, declined to attempt to convert the try in order to save time for an unsuccessful late victory bid.

And that ensured that it was once again the record-breaking Sinfield's boot that proved the difference.

"It was a topsy-turvy affair, Wakefield played really well and we were very anxious in the early stages.

"But we were playing a team with their tails up, and given where we are at the moment and the fact we had ten men who had played less than 48 hours before (for England), it was a big thing. They had one day off and they're back at it, which is not to be under-estimated.

"Parts of that game we had to pick ourselves up off the canvas, which was good. All the players that played, regardless of game time, have done a fantastic job.

"It makes good reading to see us back in the top eight, but it's not a case of one win and being back on track. It can start momentum, but we have to make sure we stay on track."

"To score 40 points at Headingley and not win is a tough one for us to take.

"We made some uncharacteristic errors but I thought our offence was outstanding. And we played some very positive stuff with the ball.

"We were very much the bearer of gifts, which converted into 18 points. The penalty was a dead-set joke. It was a terrible decision by the touch judge."