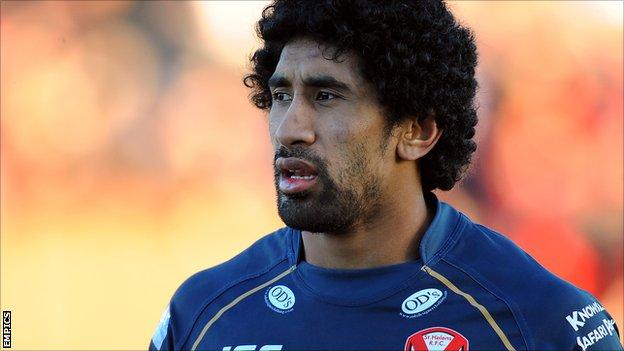 Sia Soliola has said there will be no special treatment for his St Helens team-mates when he plays for the Exiles against England on Saturday.

Soliola will line up against club colleague James Roby at Langtree Park.

"At the end of the day, everyone wants to win," New Zealand international Soliola told BBC Radio Merseyside.

"They're probably thinking the same thing. It's all fun and there will be a bit of banter afterwards, but I'm all about the Exiles this week."

Another Saints forward, Jon Wilkin, was part of Steve McNamara's England squad but missed out on selection.

"You don't really have big demands or expectations because you only have a week to try and prepare," added Soliola.

"It's a pleasure and an honour to be selected and to be a part of this thing. It makes for a good match and that's what rugby league is all about. It's good for the game."

Saturday's game is the first of two fixtures between England and the Exiles, with a second match scheduled to take place at Huddersfield's Galpharm Stadium next month.