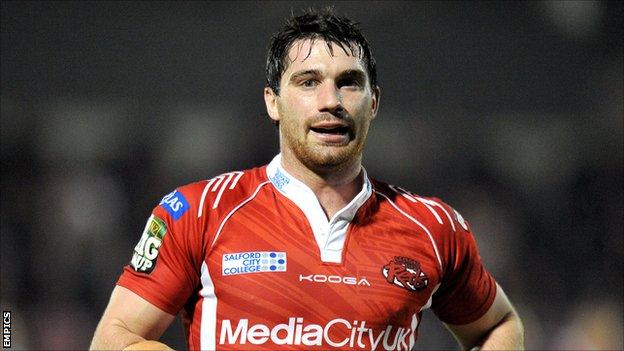 Salford coach Phil Veivers is "dead certain" that Matty Smith will join Wigan at the end of the season.

The 24-year-old half-back has received offers from four clubs, but Veivers is convinced Smith will link up with the Super League leaders in 2013.

"My job is to find a replacement or to develop someone to replace Matty."

Smith is part of the England Knights squad for their match against Ireland on Saturday.

His future has been debated for some time and Wigan coach Shaun Wane, who will lose Brett Finch and Thomas Leuluai at the end of the season, confirmed his interest in signing the former St Helens man earlier this month.

Speaking to Rugby League Extra, Veivers continued: "We made a contract offer to Matty, Widnes came in with a massive offer, Saints came in with an offer and so did Wigan.

"There are four clubs chasing one guy and the guy's got to make a decision where he wants to go or what he wants to achieve.

The way Wigan are playing, they're on top of the table, in the frame for every honour this year and you'd think they'd be there next year so you can understand why Matty would make that decision [to move there]

"He's already been at St Helens, and Widnes would have been a viable option because he wanted to be part of the rebuilding there. We're in a rebuilding stage here and I was hoping he was going to be the man that I could build the team around.

"The way Wigan are playing, they're on top of the table and in the frame for every honour this year and you'd think they'd be there next year so you can understand why Matty would make that decision. He probably wants silverware.

"It's not that it's the representative side of things because he's in the England Knights side playing with Salford."

Wigan have also been linked with a who has said he would be open to a move to the DW Stadium.