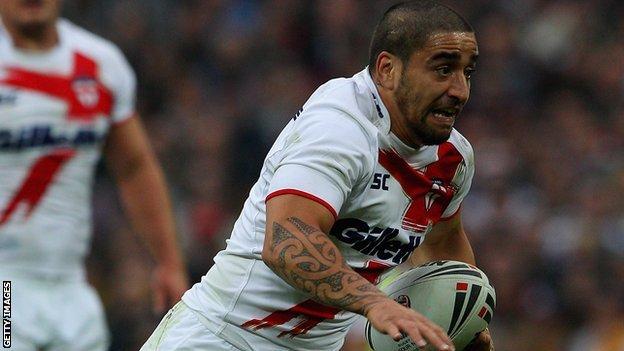 England gained revenge for last year's defeat by the Exiles with a well-deserved victory in the first Origin Series match at Langtree Park.

Gareth Hock and Danny Tickle both scored close-range tries to give England a 12-0 lead before Francis Meli slid over in reply before the break.

Sam Tomkins squeezed over to put England back in control but Daryl Millard's try gave the Exiles hope.

Wigan and Exiles' Thomas Leuluai was carried off with an ankle injury.

Wigan coach Shaun Wane will be hoping the scans on Leuluai's injury do not show serious damage, considering his importance to the Warriors.

It was a better evening for England coach Steve McNamara, who will have been particularly encouraged by England's kicking game - supported by a strong defensive display - specifically their successful tactic of kicking early in the tackle count.

There were five St Helens players representing Daniel Anderson's Exiles on their home turf - but James Roby was the only Saints player in England's ranks.

He will also have been pleased to see Hock mark the end of his three-year England exile, following a positive test for cocaine, with a commanding showing.

The result alleviated some of the pain caused 12 months ago when George Carmont snatched a 16-12 victory for the Exiles with the last play of the match at Headingley.

The Exiles had been disrupted by injuries in the build-up to the game - including to captain Brett Hodgson - and Daniel Anderson's men produced an error-filled performance as the ball proved hard to handle in wet conditions.

Last year's star man for the Exiles, Rangi Chase, was representing his adopted country England and there were signs of tension between him and the opposition.

His selection alongside Kevin Sinfield in the half-back positions - with Danny Brough left out - had also sparked comment, but it was two kicks by Chase that led to England's opening tries as they dominated the first half.

The opposition put up more of a fight in the second half, with Scott Dureau demonstrating his organisational skills and class.

But ultimately, the Exiles had left themselves too much to do through their initial sloppiness. A fumble from David Fa'alogo led to England breaking through as Chase's deflected kick was collected by Hock, who sold Shannon McDonnell a dummy before sauntering over.

Tickle then went over for his first try in internationals after Chase's high kick was patted down by Carl Ablett for Kevin Sinfield, who flicked the ball out for the second-rower to barge through.

The Exiles promptly replied, Dureau looping a pass out wide for Meli to finish. Dureau missed the conversion, meaning the Exiles trailed 12-4 at half-time.

England seized the initiative again early in the second period when Joel Monaghan failed to collect Sinfield's cross-field kick, allowing Tomkins to gather before escaping Leuluai and touching down.

Tomkins's liveliness caused more problems as he spun beyond Iosia Soliolia then kicked forward for Ryan Hall. The Leeds winger could not ground cleanly, however, thanks to a brave defensive effort from Leuluai, who injured his ankle in the process.

Anderson's men did not wilt, however, with Dureau instrumental, and the Catalan Dragons star delivered a deft kick through for Millard to crash over for a try to make it 18-10 with 12 minutes remaining.

Hard as the Exiles pressed, England closed the game out well to take a 1-0 lead into the second and final game at Huddersfield on 4 July.

England coach Steve McNamara: "It was a very tough game in difficult conditions. We got the points we scored, which was pleasing.

"We did get loose in the first half, but in the second we had to show grit, determination and steel. To play a tough team is good; to win is even better.

"We kicked well and picked up some scrappy tries. That was the only way you could score tonight."

Exiles coach Daniel Anderson: "We got stuck in, threw ourselves around and were unlucky not to score another try.

"We just couldn't get the finishing touch from some of our players. The weather didn't help.

"England were efficient and professional and scored tries from kicks. England probably handled the conditions better than we did."