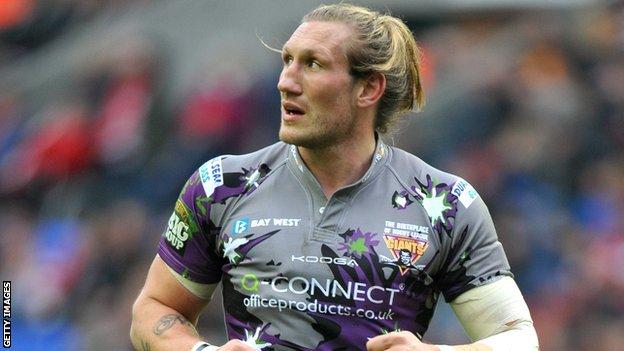 Huddersfield ran in eight tries in a convincing victory over London Broncos.

Julien Rinaldi gave Broncos a fifth-minute lead, but Huddersfield hit back with two tries in three minutes from Luke George and Kevin Brown.

Aaron Murphy extended the home side's lead to 16-4 at half-time and it was virtually one-way traffic thereafter.

Craig Gower did close the gap but two tries from Eorl Crabtree and one each for Michael Lawrence, Scott Grix and Larne Patrick gave the hosts victory.

It ended a five-match losing streak for Huddersfield while stand-off Danny Brough, who kicked 14 points, brought himself into England contention for their game against the Exiles next Wednesday.

Rinaldi gave London an early lead with Gower missing the conversion, before George's solo try put the home side ahead.

He came out with the ball from a ruck of players on halfway and dodged two would-be tacklers before racing for the line on 13 minutes.

Brown and Murphy stretched Huddersfield's lead to 12 points at the break and Broncos hit back straight after the interval.

Australian Gower converted his own try to reduce the deficit to 16-10, but that was a good as it got for the Super League's next-to-bottom club.

Lawrence, Grix and Crabtree all went over within 10 minutes to give the score a one-sided look

Substitute Patrick and Crabtree dived over late on, with Brough landing two more conversions to crown an impressive individual display.

"I'd have taken any win, but we earned the right to play some good footie with our pressure and by not overplaying our hand.

"Last week was the first one in a while where I've gone home from training feeling confident that we were going to do well.

"The important thing is the players now keep to that standard. This is a team where we need most people in the wheel to keep playing well."

"The game was in the balance and Huddersfield looked like a team low on confidence.

"We had some play near their tryline early in the second half and then the whole match changed. We had some problems out wide and in the middle.

"But to go from only 16-10 down to conceding 30 points in the last 20 minutes was unacceptable. We must do better."