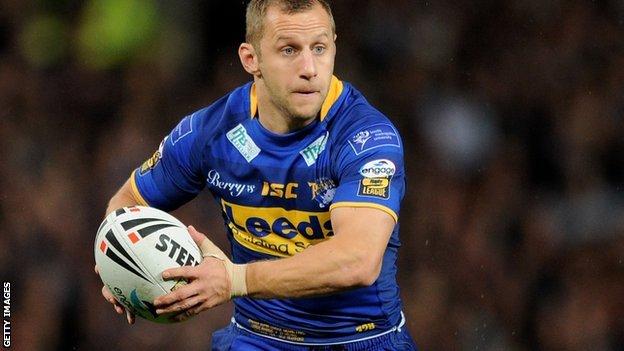 Leeds moved up to sixth in the Super League table as they comfortably defeated Castleford at Headingley.

Two tries from Rob Burrow and another from Ben Jones-Bishop gave the Rhinos a commanding lead, before a Paul Jackson score helped reduce the lead to 16-6.

However, efforts from Ryan Hall (two), Kallum Watkins and Jones-Bishop put Leeds 40-6 in front against a Tigers side who had Richard Owen sin-binned.

But they have now lost four of their last five matches, while Leeds ran in seven tries for the second time in seven days after Monday's 44-40 victory against Wakefield.

Stand-off Rangi Chase, the 2011 Man of Steel, who has admitted his future at Castleford is in doubt, was left out of the Tigers' squad.

Castleford missed him as they found themselves 16-0 down after only 22 minutes, Jones-Bishop running in the first try before a quickfire double from Burrow.

After Jackson crossed for Castleford, his first try since the opening day of 2011, Hall took a return pass from Carl Ablett to score his 500th point for Leeds.

The move of the match came just after the restart when Rhinos' Zak Hardaker beat five defenders to set up an easy finish for Watkins.

Jones-Bishop and Hall both scored again for the hosts before Owen was sin-binned for fighting with Burrow.

Despite being a man down, Castleford regained some pride with Huby going over before two scores from Ferres.

"For 60 minutes I thought we were very good. But, for the final 20 minutes I'll need to have a think about it.

"I'm caught between being disappointed and recognising that a lot of the blokes have played three games in eight days.

"I thought we were a bit passive on attack in the first half. We lacked a bit of confidence but, at 16-6, I was really positive.

"The try on half-time was really costly for us but I thought we would finish strong and that was the case. The guys didn't give up and that gives me great heart."