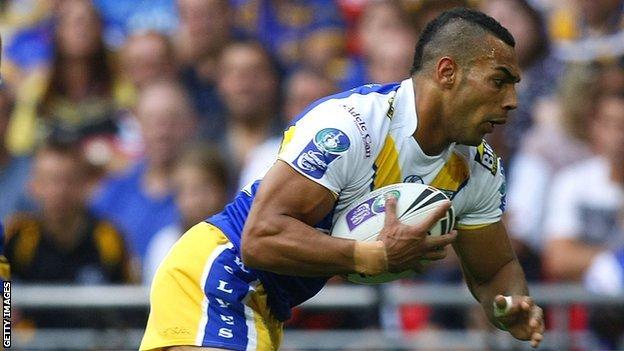 Warrington moved to within a point of Super League leaders Wigan after coming from behind to beat Hull.

Gareth O'Brien kicked a further 12 points for the hosts, who dominated the second half to ease to victory.

Hull, who held a 16-6 lead after 19 minutes, saw Kirk Yeaman, Willie Manu and Joe Westerman all cross early on.

The visitors started brightly as Yeaman and Manu put them 10-0 ahead after eight minutes and, following the first try from Atkins, Joe Westerman scored to increase Hull's lead to 16-6.

However, that was as good as it got for Hull as they only scored one penalty - from Danny Tickle - in the final 61 minutes of the match.

Tries from Riley and Atkins left it all square at 18-18 at half-time but the Wire impressed in the second half, outscoring their opponents by 22-0.

Hull were not helped when Manu was sin-binned early in the second half for interference after his side had been given a warning from referee Ben Thaler.

Briers crossed 10 minutes after the restart, England centre Atkins completed his hat-trick before tries from Carvell and Monaghan sealed the win.

"Ryan Atkins was on fire, in really good form. He looked sharp, powerful and speedy for most of the game.

"He just went tearing into them at both ends and some of his carries early in sets got us the momentum we were looking for.

"The game was there at half time for whichever team wanted to lift. In the second half we were very good. Across the board to a man, they all looked sharp."

"The rucks were disgraceful. They were the slowest they have been all year and unfortunately he was only penalising one side.

"Against a side running second on the table you need to go 50-50 with possession of the football but, with a two to one penalty count, you've not a chance.

"Our guys were good for periods but it was hard to generate any kind of field position. They became as frustrated as I did. But I saw enough spirit that we'll get back on the horse next week."