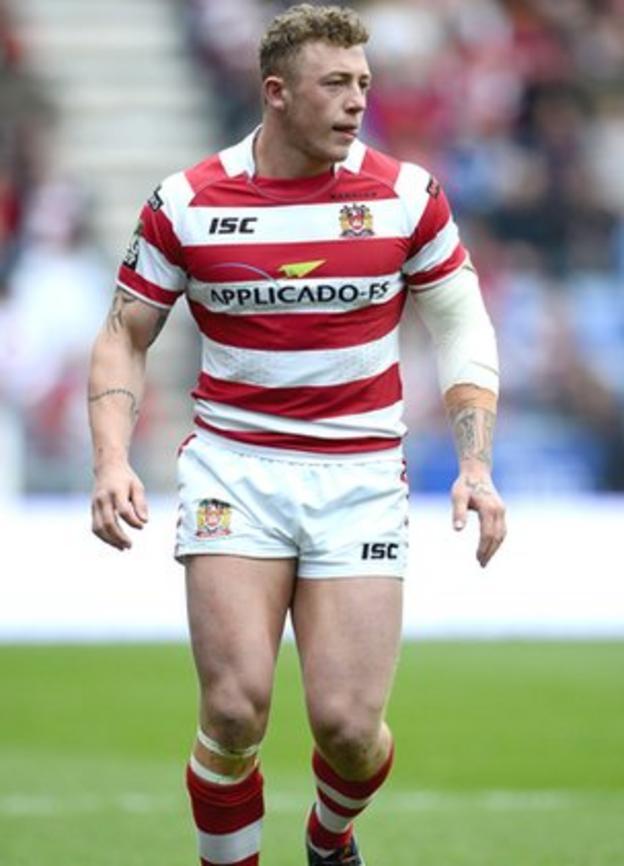 Runaway top try scorer Josh Charnley took his season's haul to 25 with a hat-trick, while Brett Finch got two.

With Patrick Ah Van converting both, but being disallowed a third on the say-so of the video referee, that meant the Wigan line had been crossed only by men who have appeared for the Cherry and Whites, Wigan old boy Cross and Mellor, who is currently on loan at Widnes from the DW Stadium.

That took him past Hull's former Wigan forward Danny Tickle and Catalan Dragons' Scott Dureau at the top of the charts.

With skipper Sean O'Loughlin slotting effortlessly into the halves to offset the loss of scrum-half Thomas Leuluai with a broken leg, Wigan cruised to a 13th successive win to re-establish their three-point lead on top, ahead of Warrington.

Stats from the DW Stadium

It took the leaders just two minutes to register the first of their 10 tries, Charnley taking O'Loughlin's pass to go in at the right corner before McIlorum brushed his way through, followed by centre Carmont's 12th try of the season.

Cross stopped the rot when he plunged over for only the second try of his lengthy career, just three weeks after scoring his first. And Mellor would have added a second try following a break from halfway but for a terrific tackle from Jack Hughes, who made up a 15-yard start to haul him down short of the line.

Mellor made amends for his earlier miss when he intercepted Finch's pass to dart 30 metres for a try on the stroke of half-time. But, after going in 28-12 up, it was just a matter of how many more tries the home side would score as they aimed to exact revenge for that smarting defeat at the Stobart Stadium three months ago when they paid the price for playing a weakened team.

As it turned out, there were two for Finch, who dummied his way over for the first of them within two minutes of the restart, two more for Charnley and a 15th of the campaign for last term's top Super League try scorer Tomkins.

"We were desperate to win that one. It wasn't as convincing as I wanted it to be but Widnes have got some good players.

"It was a scratchy performance. We were not at our best but when you consider what we've been through the last few weeks.

"We lost a couple of major members of our first-team squad and, after a week off, I knew we wouldn't be at our best. But we scored 50 points at home so I'm fairly happy.

"Josh Charley did well. He's a great asset to the club. But the outstanding player for me was Micky Mac. I thought he was ruthless. His pass selection from dummy half was brilliant."

"We talked about the start and knew they would come after us. That was our worst fear.

"I'm massively disappointed. We defended well in patches but there were some really poor individual errors, some embarrassing one-on-one stuff.

"There was loads of endeavour and lots of effort but some poor quality.

"It's been one of those years for Shaun Briscoe. We've missed his influence. He's another big loss to us."