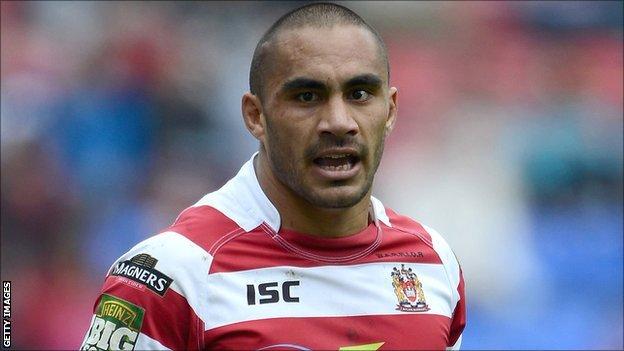 Wigan have confirmed Thomas Leuluai broke his leg whilst playing for the Exiles against England on Saturday.

There were fears that Leuluai may have played his last game for the Warriors, having announced he will leave the club at the end of the season.

But coach Shaun Wane said: "The results of the scan are better than I expected. He will play again this year."

Leuluai, who could be out for 10 weeks, is certain to miss the Challenge Cup semi-final against Leeds on 14 July.

"It is a huge blow for us, but to be honest I was relieved because it could have been a lot worse," Wane told the club website.

"If he had needed an operation he could have been facing a much longer time out.

"He will play again this year, definitely. If we get to Wembley, he could be back then."

Scrum-half Leuluai captained the Exiles team in their 18-10 defeat at Langtree Park, but was stretchered off after falling awkwardly in the second half.

Wigan have been linked with moves for Salford's Matty Smith and as replacements for Leuluai and fellow half-back Brett Finch, who have both announced their intention to leave the Super League leaders at the end of the season.