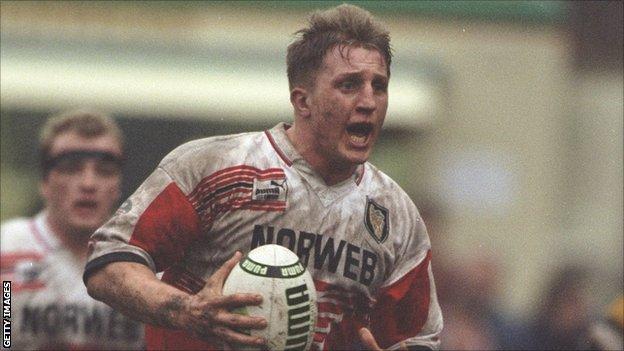 Widnes coach Denis Betts has said he owes every success in his career to Wigan, ahead of his side's fixture against the Warriors on Monday.

Betts spent 12 years as a Wigan player and won numerous trophies during two spells with the club before retiring from rugby league in 2001.

"They hold a place in my heart. I owe everything I am to them and to this game," Betts told BBC Radio Merseyside.

"It's nice to go back there. How nice? I'll let you know after the game."

The 42-year-old starred for Wigan during a period of almost uninterrupted success during the late 1980's and early 1990's as they dominated the English game.

After three years playing in the National Rugby League for the Auckland Warriors, Betts returned to Wigan and helped them to three Super League Grand Finals in the space of four years before his retirement.

He later served as part of the coaching team at the DW Stadium.

Widnes go into Monday's match bottom of the table, but with the memory of their surprise 37-36 victory over Wigan fresh in their minds.

But Shaun Wane's side have only been beaten once (by Warrington) since their shock defeat at the Stobart Stadium in March and have won their last 12 matches in all competitions.

"If we get too wrapped up in looking after Sam Tomkins, we forget about Josh Charnley, Sean O'Loughlin or Michael McIlorum," added Betts.

"They've got plenty of high-quality, fantastic players throughout their team. Sam is the icing on the cake because he can do something out of nothing.

"You have to be aware of him. To be able to control him is a completely different matter."