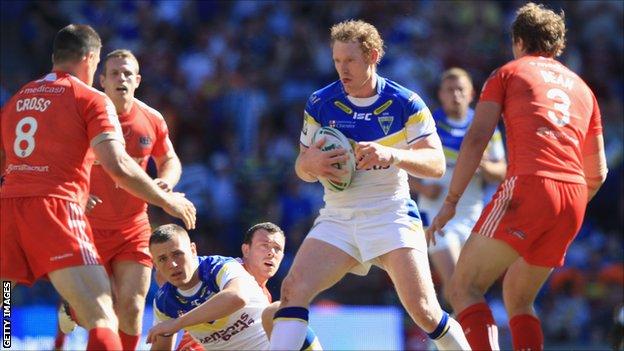 Winger Monaghan told BBC Radio Merseyside: "We started well and that's our benchmark for how to start games.

"Obviously we know that's not how games are going to start all the time but we can all strive for that."

Monaghan added: "With the players that we've got, if we get a good lead and a good start, we're hard to run down."

The Australia international failed to score during that match but will look to add to his season's tally of 13 Super League tries when the Wolves take on Hull FC on Sunday.

And Warrington will be boosted by the return of Joel's brother Michael, who is back in contention after a long absence because of a knee injury.

"We and they're a good team," he added. "We need to win because we're three points behind (league leaders) Wigan and every game is important.

"Our depth is unreal and it's been tested this year. We've got some players coming back and, from a personal point of view, it's great to have my brother [Michael] back playing.

"He's been struggling this year, and fingers crossed he can get out and string some games together."