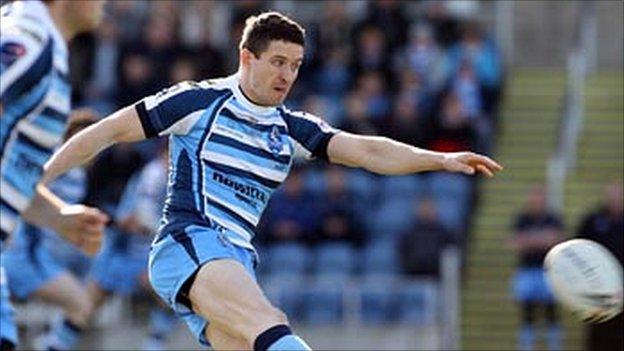 He will take up the role of assistant to Paul Anderson at Huddersfield at the end of the season.

Thorman told BBC Radio York: "This club will have played a big part in my progression as a coach and I'll always be thankful for the opportunity.

"Publicly I'd like to say thanks to the club and the fans. They've been brilliant with me."

He added: "I want to finish the season on a high."

Thorman joined York as a player and assistant coach in 2010 and moved up to head coach at the start of this season.

As a player he spent time at Huddersfield between 2005 and 2008 and during that time he captained the club in a Challenge Cup final.

However, he said deciding to leave York was not an easy decision.

"It was very hard," Thorman continued. "Firstly, the thing I contemplated was that I was going to be hanging up my boots and that's not something I took lightly because I love playing rugby league.

"I still feel I can do a job for the next two to three years, but circumstances changed that and I've decided to take up this fantastic opportunity.

"At the same time I've still got a job to do for York and I don't want to really talk about it that much more.

"My eight last games as a player and I want to go out on a high in that regard as well."