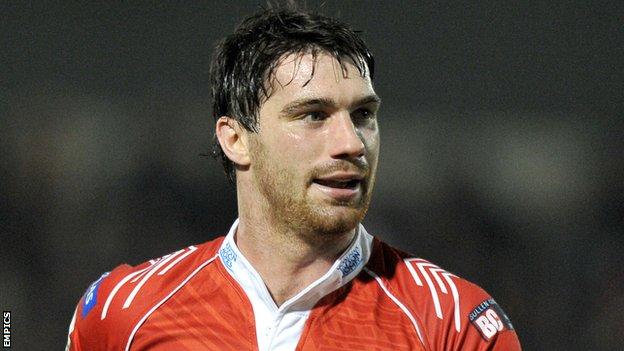 Salford half-back Matty Smith still has not signed for another club despite reportedly being tipped for a move from the Salford City Stadium.

The 25-year-old has been heavily linked to Wigan, Reds head coach Phil Veivers admitting that he was "dead certain" Smith would join the Warriors.

"If that's what Phil said it must be true," Smith told BBC Radio Manchester.

"No, I've yet to sign anywhere. Until I actually do that, with whichever club it's going to be, I can't really say."

Speaking on Rugby League Extra about any likely announcement, he added: "I'll leave that with the club who I'm going to be at next year. I'll let them do that."

On the same show last week, Veivers revealed that Smith has been offered a new deal by the Reds but had been approached by Widnes and his old club St Helens, as well as Wigan.

The Warriors are looking for half-back replacements as Thomas Leuluai and Brett Finch are leaving at the end of the season. And Wigan coach Shaun Wane has confirmed his interest in the former St Helens half-back.

Smith, who has featured 17 times this season for the Reds this year, believes his form is due to the backroom team at Salford.

"What's been big for me is the coaching staff," he added. "Phil Veivers and Sean Long coming into our squad have kind of given me a free role.

"Those two have given me that opportunity and I think it's got the best out of me, but I still think there is better to come.

"I'm still learning the game off Shaun and off Phil so hopefully we can have a good last 10 games now."