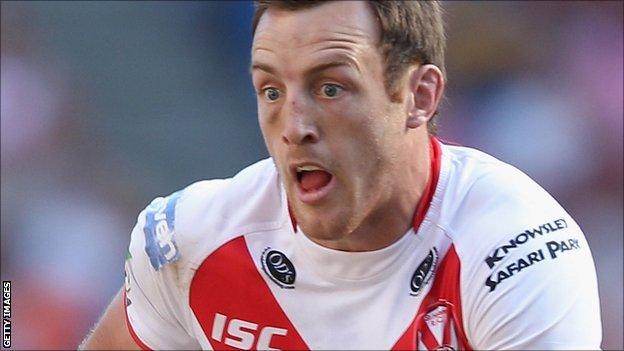 James Roby has said the departure of coach Royce Simmons in March was the "eye-opener" that St Helens needed to turn their season around.

Under Mike Rush, Saints have climbed to fourth in the table and suffered just three defeats, all to leaders Wigan.

"Earlier on in the year, we were down near the bottom of the league," hooker Roby told BBC Radio Merseyside.

"We're not used to being there. It was an eye-opener with Royce and (assistant coach) Keiron Purtill going."

England international Roby continued: "We've played well since Mike and (Keiron Cunningham) came in, apart from the Wigan games, but momentum is going our way and hopefully we can keep building on that."

Saints parted company with Simmons on 19 March after a run of four successive defeats and five games without a win.

They have since enjoyed a return to form under Rush and Cunningham, and made it nine wins from 12 Super League matches with a 32-10 victory at Salford on Friday.

But Wigan have proved to be their nemesis so far in 2012, with the Warriors victorious in both Super League meetings between the two teams and also winning in the Challenge Cup quarter-final.

The only other occasion St Helens have failed to win under interim coach Rush was on 3 June, when they drew 18-18 at Hull FC.