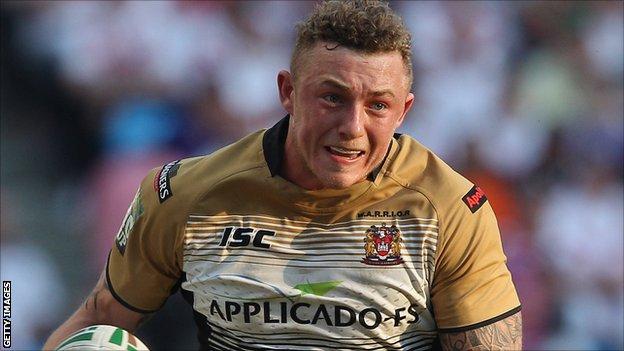 Wigan coach Shaun Wane has said the prolific form of winger Josh Charnley should not be a surprise to anyone.

Charnley became the first man to reach 25 Super League tries this season, scoring a hat-trick in the Warriors' 54-12 victory over bottom club Widnes.

"He's playing well and he does what I expect him to do," Wane told BBC Radio Manchester. "He's doing what he done for me for years with the juniors.

"Josh is a great player and his finishing is outstanding."

Charnley, who turned 21 on Tuesday, is six tries clear of Warrington's Ryan Atkins in the race to be Super League's top scorer in 2012, and is only 11 behind the record of 36 Super League tries in a single season, set by Bradford's Lesley Vainikolo in 2004.

The newly-capped England international has also scored at least one try in each his last eight Super League matches.

Wigan have now won their last 13 games in all competitions and restored their three-point lead over Warrington at the top of the table with a comfortable win at the DW Stadium.

Widnes had shocked the Warriors earlier in the season, winning 37-36 at the Stobart Stadium in March, but any danger of another upset soon disappeared as Wigan ran in three tries in the opening 13 minutes, and 10 in total, to see off the Vikings.

Despite the margin of victory, Wane said he was slightly disappointed with the performance of his team.

"We've had a really tough five or six weeks," added the Wigan coach.

"We've lost a couple of major members of our first-team squad, one of them in a major position for us in Thomas Leuluai.