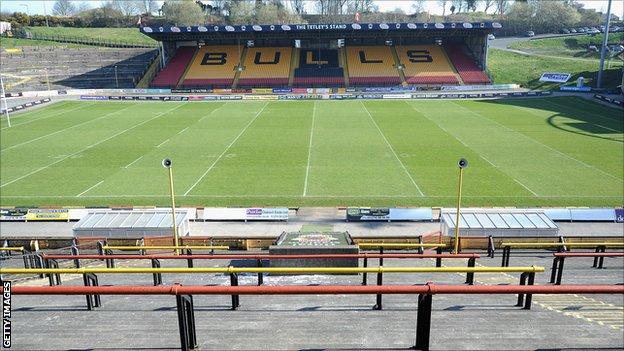 Wigan coach Shaun Wane is sad to see Bradford Bulls enter administration and on the brink of extinction.

The Bulls, one of the most decorated clubs in Super League, have less than two weeks to find a buyer and stave off the threat of liquidation.

"It is sad because they're one of the best known clubs in the competition and they're going under," Wane told BBC Radio Manchester.

The Warriors are due to face Bradford at the DW Stadium on Friday.

And Wane is thankful he can concentrate on matters on the field, rather than have to worry about how Wigan are being handled financially.

He continued: "I understand what (Wigan chairman) Ian Lenagan does with this club. He runs it very strictly.

"I don't know what the details are at Bradford but I just know it wouldn't happen here.

"Things need to be done, whether it's from the Rugby Football League or whatever. From a selfish point of view, I just want to make sure my club is in a good state.

"They've got some good people working there (at Bradford). All their players are up for new contracts, they will be trying to impress other clubs and impress Bradford, so it will be tough for us on Friday."

Bradford announced in March they needed £1m to stay afloat and are now thought to owe more than £600,000.

Joint-administrator Brendan Guilfoyle said on Monday: "We have just 10 working days to save the club from liquidation because there are no funds to carry on longer.

"If anyone is interested in buying the Bulls we need to hear from them - this club is on the brink of extinction."

Administration means the RFL are likely to hand them a points deduction, which would almost certainly scupper their hopes of making the play-offs for the first time since 2008.

However, it is likely that Bradford even if the club goes into liquidation.