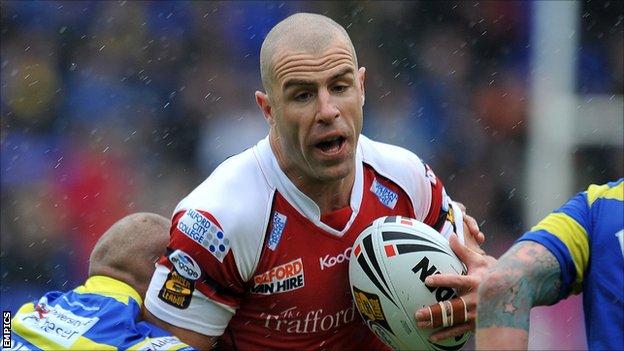 Stefan Ratchford, Richie Myler, Chris Riley and Matty Blythe were on the mark for weakened Warrington.

Gareth O'Brien kicked four from four for the Wolves.

Warrington made four changes to their squad, most notably leaving out influential half-back Lee Briers and restoring Richie Myler to the 13.

But injuries to props Shannon McPherson and Adam Sidlow forced changes within the Salford ranks.

Warrington arrived in Salford as one of only two teams to rack up 100 tries in Super League this season, but were shown the way to the whitewash in the first half by the hosts.

Their first score owed much to the pace of Danny Williams as, after exchanging passes with Sean Gleeson down the right, the winger went in for his sixth of the season.

Phil Veivers' side matched Warrington for physicality, finding a gap in their defence when the pacy Broughton stepped his man on the left to touch down.

Tony Smith's side looked shellshocked and were ripped apart by some fluid play, capped off by quickfire tries from former Wire favourite Anderson and Patten.

Warrington had a lifeline right at the end of the half when Gareth O'Brien's reverse kick bounced kindly off the upright and Salford old boy Ratchford's chase was rewarded when he snapped up the loose ball.

Any optimism brought about by that late try disintegrated just minutes into the second period, as Salford continued their onslaught.

Reds were sharp and fluid with their football, first when Broughton finished off a slick move from right to left and then when Smith picked his way through static defending for another score.

Wire now seemed well beaten and, with Salford playing exhibition football, Williams polished off another sweeping move across to the right for his second of the night.

With the game won, Warrington did conjure up a trio of tries to restore pride.

Myler struck against his former club when he shrugged off a string of challenges to dart over, and Riley followed suit soon after when he gathered Ratchford's face ball out wide to scoot in.

Blythe added a further try against the tiring Reds, but it was 'The General', Patten, who had the last say with his score on the hooter.

"The last time we played Warrington, Tony Smith also rested a few players but we came up short. He rested a few again today but we threw a lot at them and our gameplan worked wonders.

"We have been beating the drum about the entertaining football we play for some time and have beaten Huddersfield and Catalans. Our problem has been the other side, defensively.

"I am very happy with this result and Tony resting a few should not detract from our performance. All their players had Super League experience. It was just a bit frustrating to let in 18 points near the end."

"No excuses. We were outplayed by a very good team. Salford deserved their win.

"Some of our missing players were injured and some rested. I didn't want to take any risks with a cup semi final in a fortnight and a few players in Wednesday's Exiles match.

"We have rested and rotated all season. And we still had a talented team out there. If anyone wants to blame me they can. I have no drama with that. It's how we bounce back from bad days that shows character and we have to learn from this."