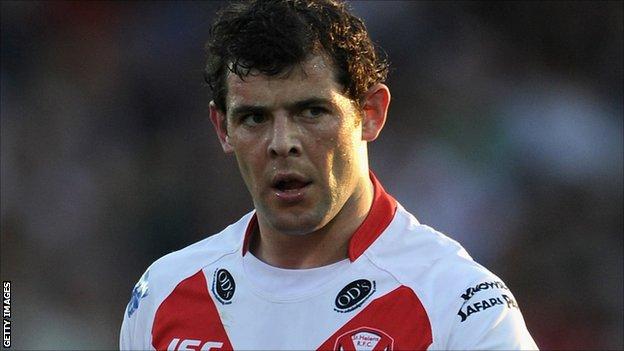 St Helens survived a brave fightback from Hull KR to record their third straight Super League success and close the gap on Wigan and Warrington.

Saints went 26-0 up through Paul Wellens (2), Josh Jones (2) and Jonny Lomax, but Scott Taylor and Sam Latus got Rovers within two points.

To add to Rovers' disappointment, Ben Galea limped out of the game with a hamstring injury, to add to coach Craig Sandercock's growing injury list.

Saints move up into third, three points behind Warrington and six adrift of leaders Wigan, both of whom suffered surprise defeats.

Hull KR's bus broke down to cause them to arrive late at Langtree Park and that delay seemed to impact on their opening.

Sandercock's side coughed up a penalty and scrum-half Lomax slipped through unopposed to plant the ball beneath the posts.

Gaskell, back in the side to partner former academy team-mate Lomax in the halves, was moving Saints around well with an intelligent kicking game.

One such kick was held up well by Lomax, who fed the supporting Wellens for a try.

Wellens then again took advantage of the stand-off's kicking when he gathered a grubber kick to touch down.

Saints were flying at that stage, Jones adding a brace of quickfire tries, but Rovers ended the half the stronger to reduce the deficit.

First Taylor powered in from close in, Latus followed up after Graham Horne's prompting and then added a second from Scott Murrell's combination with Galea.

After the break Rovers continued where they left off, with scores from Taylor and Hodgson to go ahead for the first time.

But Saints, with just two league defeats under Mike Rush and Keiron Cunningham, showed their mettle to secure the two points through tries from Laffranchi and Puletua.

"At 26-0 up, we were playing the best 30 minutes since we took over the coaching. But mentally we switched off and made a couple of errors and gifted them a try. I am at a loss to what happened, but we are going to have to watch the video and fix it.

"We've defended pretty well generally, but today we haven't and we need to address it. But we're confident in ourselves and were never going to give up.

"The two tries in the end showed that. It is pleasing, as we approach the business end, that we can pull something out like that."

"I am very disappointed at losing. Our start was unacceptable, but we were good enough to get back into it. Once we got an even share of the ball we showed we were a decent footie side.

"We had the game in our grasp but, just at the end, we were not quite good enough to get the rewards to cap what would have been a special comeback.

"We were flat at the start because we had spent six and a half hours on the bus because our coach broke down. We wanted the game to be delayed by 10 minutes but the match commissioner would not do that. It takes time to get athletes rubbed and strapped and ready to play a physical sport."