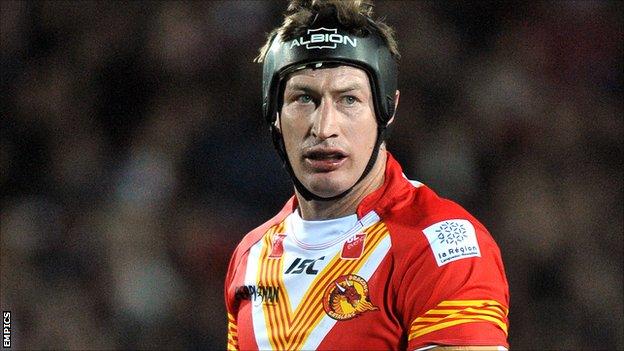 Catalan's Steve Menzies celebrated his Exiles call-up with two tries in the home victory over Wakefield.

Winger Damien Blanch (3) and Clint Greenshields added further scores for Catalan, while Ali Lauitiiti and Kyle Trout touched down for the visitors.

Veteran second-row Menzies scored twice in the first half as the Dragons led 18-6 at the interval.

Scott Dureau kicked five goals for the hosts, but Paul Sykes could only convert one of his side's two tries.

With Wigan and Warrington both losing on Friday evening, there was a certain amount of pressure on Catalan to increase the pressure on Super League's top two.

The victory, which moves the Dragons above St Helens into third position, leaves them a point behind the Wolves and four behind the Warriors.

The home side made the better start in hot conditions in Perpignan and crossed for the opening try of the game after four minutes.

Vincent Duport pounced on an error from Wakefield full-back Richie Mathers to set Blanch clear for the first of his three scores.

Then Menzies, 38, defied his age to intercept near his own line and run the length of the field to double Catalan's advantage.

Wakefield's Lauitiiti showed wonderful power and skill to halve the deficit, but the French side restored their 12-point lead when Dureau set up Menzies to crash over for his second try.

After the break, Greenshields raced onto his own kick to touch down, before Wildcats second-row forward Trout added a try of his own, although Sykes hit the post with his goal attempt.

Blanch was able to complete his hat-trick in the closing stages, finishing off two good team moves to kill off the contest.

"It was slightly easier last week due to the conditions, not easier to defend, but it is harder to make breaks.

"The challenge was to do it in 30 degrees here today against a team that can score lots of points. That pleased me.

"Steve Menzies played really strong today. It was a tough day for an old man, but he played strong and his first try came at the right time for us.

"What was good for us was the French players that stood up for us and played well."

"It was tough for us today. We travelled for 12 to 13 hours yesterday to get here and that is not good preparation for us to play here in this heat.

"I don't want to sound like I'm using that as an excuse because I'm not, but as far as performance goes, it is not ideal.

"If you look at the tries we conceded, two were from high kicks at the start of the half and one was an intercept. They haven't really broken our line too often so we can look back on that as a positive.

"We've now finished our run of away games at Leeds, Bradford and here so we can go back home and look to build on our promising performances."