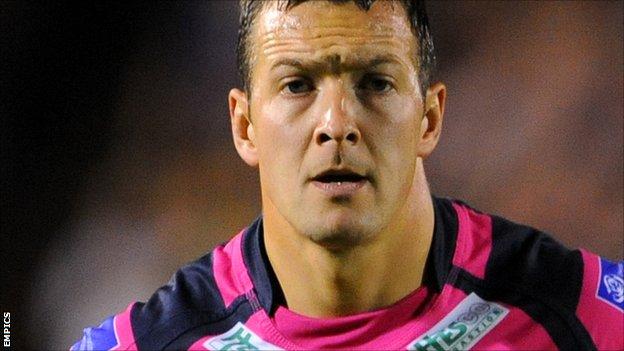 After a scoreless opening 22 minutes, Leeds led 24-6 at the interval, McGuire and Shaun Lunt both crossing twice.

Reigning Super League champions Leeds rise to sixth in the table, while the Broncos remain second from bottom and will be overtaken by Widnes on Monday, if the Vikings avoid defeat against Castleford.

London began brightly and took the lead after an early stalemate, Bailey opening the scoring after an excellent surging run from Julien Rinaldi.

But the Rhinos responded almost immediately, with two powerful tries from Lunt and a further two scores from McGuire, to take an 18-point lead into half time.

Winger Dixon brought the home side back into the game just after the break, seizing on a loose pass from Hardaker to cross over for London's second try of the match.

David Howell almost reduced the deficit further, but he was unable to collect a pass from Witt, and the Broncos were made to pay by McGuire, who completed his hat-trick on the hour mark after Ablett had raced clear.

Ablett touched down for a try of his own soon afterwards and Leeds were able to canter home against a team with only three Super League wins to their credit all season.

Jamie Jones-Buchanan broke to set up McGuire for his fourth and the Rhinos' seventh try, before efforts from Hardaker, Burrow and Leuluai set the seal on a comfortable victory for the visitors.

"I feel sorry for the people who had to pay and see us capitulate like that.

"I do not think it is fair at this level to perform so poorly in the last 20 minutes of any game.

"At 24-12 down I thought we were well in it and were the better side but it never seems as though we can do it and that is sad.

"It is not an ability thing or a lack of effort. We have to look at how we can turn things around."

"I actually thought this was a really tough game.

"Of all the games where you look at it and say the scoreline did not reflect the match, this was it.

"It was a game of four quarters and we took the most of what came our way.

"We are still not where we want to be as far as our league position goes, but we have a bit of momentum now and a big game to come against Hull next week."