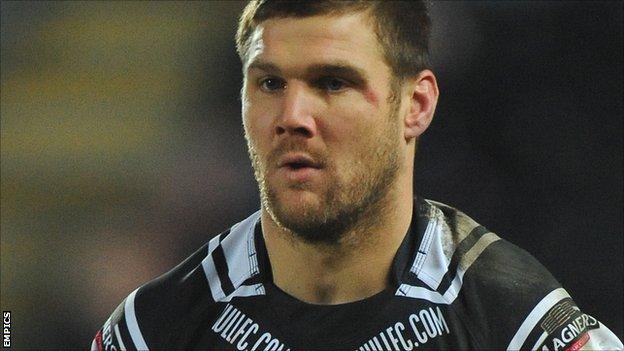 There was late drama at the KC Stadium as Hull FC snatched a 28-24 victory against Huddersfield Giants.

Eorl Crabtree looked to have won it for the Giants but Kirk Yeaman scored the decisive try in the dying seconds.

Leroy Cudjoe, David Faiumu and Aaron Murphy also went over for the visitors. Half-back Danny Brough was successful with all four of his goal attempts.

It was a match containing errors from both sides, but no shortage of drama, with four tries coming in the final 14 minutes.

Hull claimed their first win in five Super League matches, while the defeat for Huddersfield means they have only once in their last six outings

Had Huddersfield held on, they would have been level on points with fourth-placed St Helens in the Super League table.

However, they remain fifth, heading a group of three teams on 22 points, the others being Leeds and Sunday's victors Hull.

The home side went ahead as early as the third minute, Crooks taking a pass from full-back Richard Horne to cross for his fourth try in seven Super League matches.

Huddersfield responded when Cudjoe touched down and Brough, a probable England debutant against the Exiles on Wednesday, kicked the extras.

Hull went ahead again when Briscoe rounded off a swift team move, but their hopes of a half-time advantage were dashed when Scott Moore and Brough set up Faiumu to give the visitors a 12-10 lead at the interval.

After Murphy had gone over for a third Giants try, home debutant Heremaia and Yeaman put the home side back in front with scores of their own.

Yeaman's first effort came as a result of a poor offload from Huddersfield's Crabtree, but the Giants prop made amends moments later, crashing over for his ninth try of the season.

Brough slotted over the kick to give Nathan Brown's side a two-point lead with four minutes to go, but they could not hold on.

The Giants conceded possession by allowing the restart to go into touch and Yeaman punished them by scoring his second and Hull's fifth try.

"I'm very pleased that we finally found a way to win. There was desperation there with four minutes to go when they hit the front.

"It was the same old story again and we'd spoken about it this week about being the last to score and not giving up points late in the game.

"They finally showed some resolve and found a way to win.

"We lacked a little bit of cohesion at times but this is something we can build on."

"I can't fault the players' commitment. It is the best we've played for five or six weeks.

"But I thought we let ourselves down by not sticking to the process we need to do to give ourselves a good chance of winning.

"In the second half, we spent most of the time on our own line and didn't get much football due to one or two small things that we didn't do so well.

"It was a huge improvement from where we've been. We need to improve again next week and then we've got the Challenge Cup semi-final."