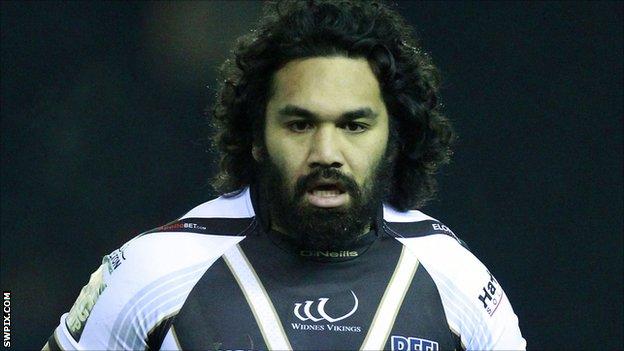 Widnes recorded their fourth win of the season in beating Castleford 40-10 to climb off the bottom of the table.

Nick Youngquest and Stuart Jones went over for the Tigers, with Craig Huby converting one of them.

Both sides came into the game on the back of defeats - Widnes away to league leaders Wigan; Castleford to Leeds at Headingley.

It looked to be a closely-matched encounter after early completed sets, but indiscipline cost Castleford when prop Huby was placed on report for a dangerous tackle on Hep Cahill a metre from his own line.

It was the second penalty conceded in the set and Vikings centre Marsh ensured it would be a costly one when he finished off a slick pass from Joe Mellor.

Ian Millward's Cas were struggling to cope with the intensity of the Widnes attack, but scored a try against the run of play.

Rhys Williams carried the ball from inside his own 40-metre mark deep into the Widnes half, and when a ricochet later in the move reset the tackle count, Huby fed Youngquest who had the pace to skip through the gap to score.

But that respite was very brief as Widnes built up the pressure, and Winterstein showed power and control to bash his way over from close in with the hosts camped on the Cas line.

Only determined defence from the visitors held up first Chris Dean and then Cameron Phelps when a try looked inevitable, while at the other end of the field Ah Van's hit on Jordan Thompson kept the centre from taking the ball over the whitewash.

Ben Davies rounded off the first-half scoring for the Vikings when he took in Clarke's well-worked ball to slide over shortly before the break.

A well-worked restart in the second period gave Castleford possession but they wasted the opportunity, and it took Widnes just five minutes to add to their tally.

Turnover in midfield gave Winterstein the chance to drive the ball forward, and from the resulting play-the-ball, Ah Van fed McShane who crashed over.

Errors again handed Widnes position for their fifth try, which Mellor romped through to score after a sweeping move from left to right.

Stuart Jones burst over for Castleford to reduce the arrears, but again it was a fleeting moment of enjoyment for their fans as Eamon O'Carroll got fingertips to a McShane grubber to boost Widnes' tally.

And Ah Van added to his five successful kicks with a late scoot in at the left corner to take his personal tally for the night to 14, with Hanbury converting the former Bradford wing's score.

It was enough to see the Vikings through to a precious two points, and leave Castleford's hopes of making the play-offs looking slender at best.

"The players were fantastic. The lads really have been great this month. They have taken a lot of stick and the resilience and toughness is coming through.

"The players deserve it - we knew these days were going to come. All credit to the lads, there were too many to name who were great for us.

"[Jon] Clarke was outstanding though, he put in a great effort as did Eamon O'Carroll on debut."

"What I will say to the fans is to hang in there. I'm not here to dwell on anyone who is out or who has gone for operations. We are in a position at the moment and I have faith that we will get out of it.

"We had a completion rate of 26%. It's a simple game, you don't have the ball you are not going to score. We just didn't give ourselves a chance. That's for me to work out why that is.

"At half-time we were comfortable to be honest but we didn't complete and we have had that for a while. We spoke about retention of the ball and exposing some areas but it never happened and we need to look at it.

"Widnes were the better team. They were more consistent and better in more areas. I'm not going to downplay their contribution. They were good and they have beaten some good sides here."