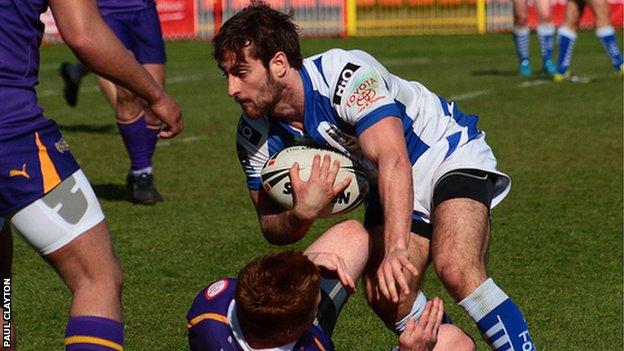 Cumbria full-back Brett Carter has credited the togetherness within the representative side's squad for the Rugby League Nines final success.

The team, recruited from Barrow, Whitehaven and Workington Town squads, beat Leeds, Wakefield and Featherstone to secure the silverware at Headingley.

"Today goes to show what Cumbria is all about," Carter told BBC Radio Cumbria.

"Everytime the lads get together, like when we played England Knights and England, we all work for each other."

The achievement was made even more remarkable by the fact the tournament came just 48 hours after a close-fought derby between Town and Haven at Derwent Park.

"It took us a bit to get going, but we showed everybody how well we can all come together," Carter continued.

"We haven't trained together, but everyone plays for each other."

For coaches Darren Holt, Don Gailer and Gary Charlton, the victories over Super League opposition in Wakefield and Leeds were particularly sweet.

"I think they're a bit young throughout the grades, although they've got plenty of skill in a Super League environment," Haven coach Gailer said.

"But that played in our favour a bit, we're a bit harder in defence, we're doing that week after week and it makes them sit back and think a bit.

"I like the way they put on a representative jersey and the club loyalties are forgotten, and their work in defence is fantastic.

"In a game like nines you think it's all about attack but you win the game on defence and we kept turning up every time there was half a break on.

"It's a great result for the area."