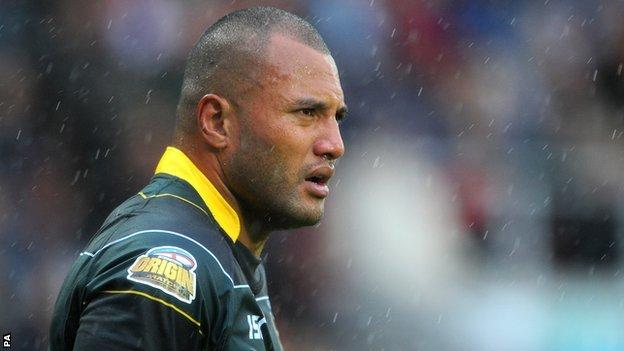 The Exiles retained the International Origin trophy as a deserved win over England saw the series drawn 1-1.

The two sides traded tries early on with Brett Hodgson and Scott Dureau scoring for the Exiles and Ryan Atkins and Josh Charnley replying for England.

The Exiles seized the initiative as Joel Monaghan and Francis Meli crashed over either side of the break.

Tom Briscoe scored to give England hope but Hodgson and Meli both crossed again before Leroy Cudjoe's consolation try.

The Exiles' victory means a tied series, with Daniel Anderson's side keeping the silverware as a result of their win in last year's inaugural one-off International Origin encounter.

It was a difficult night for us. I'm massively disappointed. We did a lot of good things but there is not a lot of experience in our squad. The experience in the Exiles side is what told, but we're building towards the 2013 World Cup. We've got some great players in Super League and the challenge is getting them playing more often. These games are all about creating Test match intensity and that probably got to us in the end.

It was an experimental England side at the Galpharm Stadium, with coach Steve McNamara retaining only five of the starting line-up from the 18-10 win over the Exiles at Langtree Park on 16 June.

McNamara said he wanted to test the international credentials of some of his younger fringe players, but there remain more questions than answers about many of them.

It was not just the rookie players making errors, though. Some of Super League's best were uncharacteristically out of sorts in a display that contained a few flashes of brilliance but far more examples of ineptitude, particularly in defence.

Too often, the Exiles were able to break through to amass points as missed tackles and bad positioning cost McNamara's men against Anderson's vastly more experienced and superior side.

It was Hodgson who got the scoring under way, timing his run to perfection to collect from Dureau and score in the fourth minute.

England had not looked like scoring until centre Atkins accelerated away from dummy half from well inside his own half in the 20th minute to sprint clear to the other end.

Dureau restored the international side's advantage when he accepted a Lincoln Withers pass to go over from close range but again England hit back when Cudjoe created the opening for Charnley to score in the corner.

The Exiles scored an important third try before the break with Monaghan charging over after taking Hodgson's pass and then added a more decisive fourth through Meli early in the second half.

When Hodgson dummied his way over for his second try, before adding a third goal, it appeared as though the game had gone for England, but Danny Brough's long pass sent Briscoe over to give them hope of a late comeback.

But Meli grabbed his second try following a break by Daniel Holdsworth to finally end England's challenge before Carl Ablett sent Cudjoe over for his late consolation.

England coach Steve McNamara: "We exposed a lot of our young players all at the same time. They will improve from that.

"If you throw another couple of senior blokes alongside those young people you'd see a different performance and possibly a different result.

"I don't think they're further away at all. This will make them even closer to being selected further down the track.

"We've said all along it's about building a squad and a programme that gives us the best chance of winning the World Cup at the end of 2013."

Exiles coach Daniel Anderson: "We made some adjustments. We had some different personnel but we wanted to represent the Exiles' brand of rugby and that is a skilful brand of rugby and I thought we showcased that in dry conditions.

"Even though we scored points, we had a lot of other opportunities and probably butchered a couple."