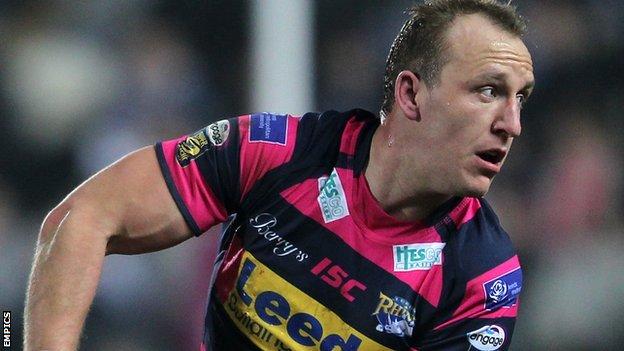 Ryan Hall slid over shortly after the interval as Leeds looked to have put the game beyond the visitors.

Richard Horne's try put Hull FC on the board but that was as good as it got for them and a Kevin Sinfield drop-goal completed the scoring.

Hull handed a debut to utility back Ryan McGoldrick who had joined the Black and Whites from Castleford earlier in the day.

The Australian's arrival came the day after forwards Sam Moa and Danny Tickle were ruled out for the rest of the season with bicep injuries.

Despite their injury concerns and having only won one of their last five matches, the visitors started the match in seventh, just one place behind last season's Super League winners, the two teams being separated only by points difference.

The visitors made the strongest start in a game played in tricky conditions after a day of heavy rain left the Headingley pitch soaked. But they fell behind when Ryan Bailey charged down a kick and Shane Lunt put Ablett in for the opening score.

Sinfield offloaded to Delaney who scrambled over from close in to extend the Rhinos' lead after Leeds were given a fortuitous penalty.

After Sinfield was denied a third try for a knock-on he kicked his side into a 14-0 half-time lead from a penalty.

Leeds put the game beyond Peter Gentle's side shortly after the break when Hall slid over for his 20th try of the season after a good combination of passes.

Horne put points on the board for the visitors when he capitalised on some slack Leeds defending to touch down.

They were unable to mount any serious challenge on the Leeds total and Sinfield completed the scoring in a scrappy encounter with a drop-goal.

The result moves Leeds up to fifth ahead of next Saturday night's Challenge Cup semi-final against Wigan, while Hull, who brought Lee Radford out of retirement, remain seventh.

"We're building some momentum now. In the last four games we've got better in each game.

"It's a big game next week against a very good team and we'll have to be very good. It's exciting but we can't get wrapped up in it.

"We're getting there, if that second half is anything to go by. I thought we played incredibly well in the first half, when we handled the conditions really well.

"Tonight wasn't perfect but we came up with the important plays when it mattered."

"Injuries dictate that you call on all your resources. We had a team out there tonight that could have won.

"We played with plenty of heart but were not very smart. I thought our defence was terrific and we can take encouragement from that.

"If you get the defence right, you've got a base to work from. We defended well but our execution and kicking game let us down.

"You've got to give Leeds credit. They kicked us off the park and handled the conditions a lot better than us."