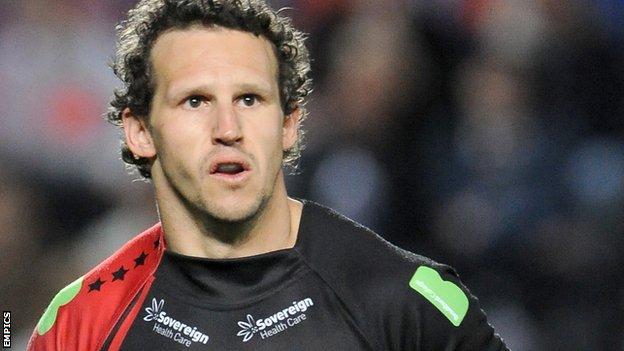 Four Brett Kearney tries helped make it a hat-trick of Super League wins for crisis club Bradford as they swept aside bottom side London Broncos.

Manase Manuokafoa got the hosts underway before Kearney went over.

Luke Gale and Elliott Whitehead scored for the Bulls either side of Kieran Dixon's first try for the visitors.

Michael Platt crossed before the break and Kearney notched a second-half trio of tries, while Dixon and Will Lovell contributed consolation efforts.

Bradford, who missed two training sessions midweek as confusion reigns at Odsal over the future of the club, were rarely troubled by a Broncos team shorn of skipper Craig Gower after he was injured in the warm up.

Line breaks by Kearney and Platt gave the hosts the early momentum and, when Manuokafoa took Heath L'Estrange's short pass, he crashed over on 12 minutes.

Within five minutes full-back Kearney had jinked his way to a try and Gale was gifted a score when Dixon lost the ball in the tackle.

Gale was on target with all three conversions for an 18-0 lead.

Dixon pulled one back but was twice at fault as he fumbled a kick to allow Whitehead in and then was out jumped by opposite number Shaun Ainscough who fed Platt with a scoring pass to make it 26-4 at the turnaround.

Gale and Ben Jeffries combined to put Kearney in for his second after the break and the Australian grabbed his hat-trick on 57 minutes.

Centre Lovell added his effort, his first score in Super League, in the final minute of the game.

"I'm not a guy that breaks out in tears very quickly but I reckon I came close at one stage. You can see from the fans' reaction why they have to be in Super League and why the club needs to continue because you just don't get that at too many places.

"The fat lady hasn't sung yet, although she's warming up. I don't know what's going to happen. No one is talking to me. I don't want to predict it. It's way out of our hands.

"If you can get a positive from this situation, it's that the players are playing at their best. It was on show today and it was there last week. I can't be happier with the players under the circumstances. They've been phenomenal all the way through. They're not letting anything affect what they do on the field."

"We need to pay Bradford some credit for coming out and playing as strong as they did and with as much enthusiasm as they did with the turbulence and turmoil they're going through.

"They clearly out-enthused us from the first minute.

"That wasn't an easy act and it doesn't take away from the fact that we were poor."