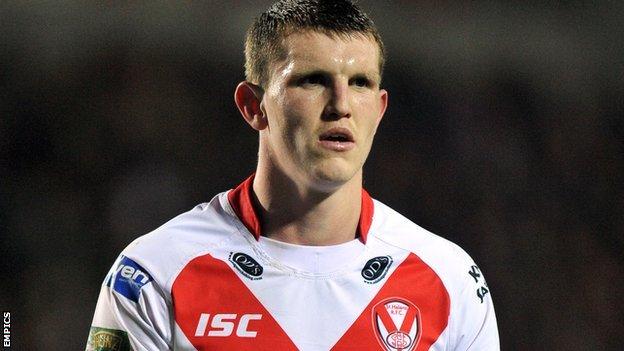 St Helens moved up to third in Super League and are now unbeaten in five after a last-gasp victory over Widnes.

A last-minute Josh Jones try and Lee Gaskell's touchline conversion with the last kick of the game gave Saints both points.

Patrick Ah Van's hat-trick and tries by Chris Dean and Cameron Phelps had given the hosts hope of a famous win.

St Helens had thrashed the Vikings 62-0 at Langtree Park earlier this season, just a week after scraping home 40-38 in another tight game at the Halton Stadium in the cup.

This time it took half an hour to score before Kiwi Lance Hohaia, in for the injured Jonny Lomax, provided the kick which was fumbled by Rhys Hanbury to gift Soliola a try.

But Hanbury compensated two minutes later when, after his high kick allowed Ah Van to pounce, he levelled the scores from the tee.

After going in 6-6 at the break, James Roby's pass then saw Wilkin force his way over, Gaskell converting, but Hanbury was again on hand and his perfectly-timed pass put Dean in.

Widnes fans thought Hanbury's conversion was good but, although it was ruled out, Dean then sent Ah Van over for his second try and a slender 14-12 lead.

Saints were back in front when Shenton shrugged off Ah Van to score, Gaskell converting from the touchline for an 18-14 lead.

But Ah Van levelled again at 18-18 when he intercepted Dixon's pass and sprinted 80 metres for his hat-trick.

After Hohaia had missed a drop-goal attempt and Wilkin was narrowly denied a try, Hanbury then did slot a one-pointer at the other end eight minutes from time for a 19-18 lead.

And Widnes thiought they had it won when Clarke and Dean put Phelps over in the corner to make it 23-18.

But Stefan Marsh missed the goal and Jones responded for Saints by also going in at the corner, Gaskell's boot proving true to earn a dramatic victory.

"It was a great touchline conversion by Lee Gaskell but I don't think it should have got to that.

"We had a lot of possession and didn't take our chances.

"There were a couple of dubious calls and Paul Wellens got the ball over the line fair and square.

"I'm sure Lance Hohaia scored under the posts too and, if I'm wrong when I look at the video, I will be surprised."

"It looked over to us but the referee said he could not give it because the touch judges ruled it didn't go over.

"It was a great game and we had a real dig. It feels like we won the game and we did what we came to do without a shadow of doubt.

"A couple of penalties against us were harsh but we are starting to reap the rewards we have put in this season.

"We are in a dogfight at the bottom but we improving and getting there.