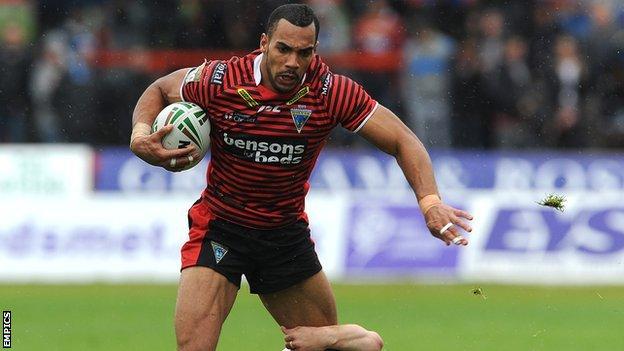 Warrington warmed up for the weekend's Challenge Cup semi-finals with a win over Catalan Dragons.

The home side led 6-0 at the break thanks to a converted Ben Westwood try.

Ryan Atkins' 20th try of the campaign stretched their lead, only for Catalans to hit back through Jason Baitieri's try, converted by Scott Dureau.

But a Gareth O'Brien penalty, followed by Michael Monaghan's drop goal and a second goal of the night for Brett Hodgson took The Wire out of sight.

Fourth-placed Catalans won 22-20 win at the Halliwell Jones in the corresponding fixture 15 months ago and a repeat would have catapulted them up into second.

It was a high-class game of hard, tough rugby league

But Warrington ensured that there would be no repeat as they moved back to within three points of leaders Wigan.

Warrington coach Tony Smith made wholesale changes from the side that slipped up at Salford, Hodgson, Monaghan, Westwood and Garreth Carvell all returning, but Lee Briers failed to report fit, pulling out with an Achilles injury, which meant a late call for Stefan Ratchford as his replacement.

Catalan Dragons had teenage winger Damien Cardace back from injury, but Louis Anderson missed out against his old club, while Setaimata Sa, William Barthau, Thomas Bosc and Frédéric Vaccari were all sidelined too.

On his return from a hernia operation, Westwood claimed the only score of the first half, crashing over for the easiest of scores on 13 minutes after loose forward Ben Harrison had made a lunge for the line, Hodgson adding the conversion.

The Catalans threatened only fleetingly, largely through the prompting of Leon Pryce, but made a lively start to the second half and could have scored in either corner within first four minutes of the re-start.

Right winger Damien Blanch got over from dummy half only to be held up on his back, while full-back Clint Greenshields broke clear down the middle to set up the position for Daryl Millard to get Damien Cardace crossing at the other corner. But slow-motion replays indicated that the teenage left winger had put a foot on the touchline.

Stats from the Halliwell Jones

And Wolves immediately made the most of the let-off by scoring again from their first attack of the second half.

Westwood and Harrison kept the ball alive on the last tackle, allowing left centre Atkins, who was roaming on the right, to kick ahead and beat Greenshields to the touchdown.

The Catalans struck back on 58 minutes when a charging run from skipper Remi Casty created the position for veteran second rower Steve Menzies to put loose forward Baitieri through a hole in the Warrington defence, Dureau's goal cutting the gap to four points.

But O'Brien put more distance between the teams with a 64th-minute penalty awarded for a high tackle on Monaghan that led to prop David Ferriol being put on report.

Monaghan's drop goal four minutes later then put two scores between the teams and, after both sides had spurned try-scoring chances, Hodgson completed the scoring with a penalty two minutes from time.

"It was a high-class game. Neither team was at their best in attack but there were two committed defences and you had to graft your way through it. It was hard, tough rugby league.

"We were up against one of the best teams in the competition and we lifted our intensity. The Catalans are a very good team and, at the back end of the year, they will be up there threatening.

"Lee Briers trained all week but his Achilles wasn't right to play. It came as a shock to us all but Stefan Ratchford did a fantastic job, to say he didn't know he was playing until 40 minutes before kick-off."

"You want to see more of those battles in our game. We had more arm wrestles than we've had in a long, long time and it was good to see.

"We could have fallen apart in that first half but we fought our way back in.

"I'm disappointed with our execution but the attitude and the defence that we've created over the last three weeks shows we're heading in the right direction."