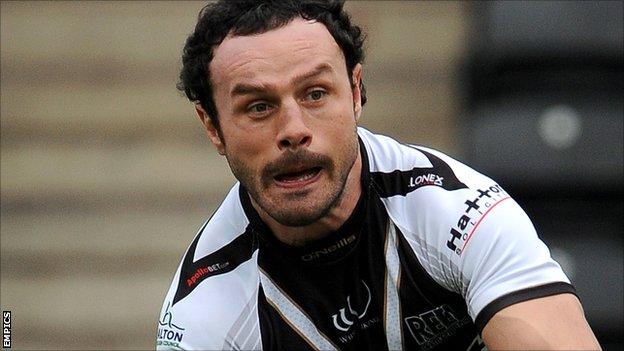 Clarke returned for Monday's 40-10 win over Castleford, a result that lifts Widnes off the bottom of Super League.

"It helps when you get some of your first 17 on the pitch," he told BBC Radio Merseyside. "That's no disrespect to some of the lads that have come in.

"A few older heads on the pitch added some maturity to our game."

Stefan Marsh and John Kite also returned for the Vikings on Monday, while new signing Eamon O'Carroll also made an impact, scoring a try on his debut at the Stobart Stadium.

It was only the fourth victory of a season that has seen Widnes struggle on their return to the top flight.

"We really wanted it. You set yourself up sometimes if you say it's a must-win game. The pressure gets too much and you end up crumbling. We thought if we performed well, we'd get the win."

In their last four Super League matches, Widnes have beaten Huddersfield and Castleford, suffered a last-minute defeat at London Broncos and produced a positive display in a heavy defeat at Wigan.

Coach Denis Betts added: "Our home games have been really important to us and our form over the last month or so has been pretty good.

"Even against Wigan with a 50-point deficit, there were some good quality things happening in the team.

"Things take time and all the credit has to go to the players for how hard they're working."