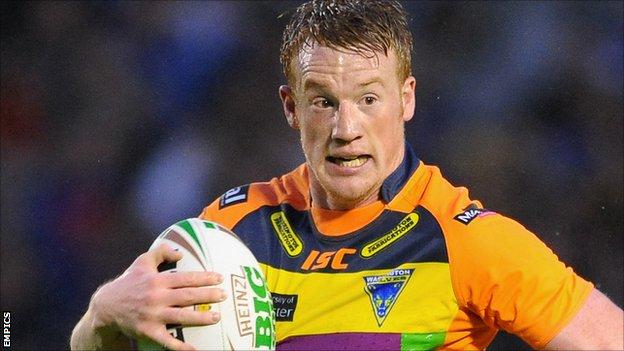 Chris Riley says Warrington cannot afford to take their focus away from Super League, despite the prospect of playing in another Challenge Cup final.

"I don't think we can put too much emphasis on the Challenge Cup," winger Riley told BBC Radio Merseyside.

"It may cost us two points. We can't afford to lose to Catalan."

The Dragons will move above the Wire with a victory at the Halliwell Jones Stadium, and they also have a game in hand on Tony Smith's side.

Warrington, winners of the Challenge Cup in 2009 and 2010, will be favourites to progress to a third final in four years at Wembley in August, as they take on a Giants team struggling for form in recent weeks.

But they missed the chance to close a three-point gap to Super League leaders Wigan last weekend.

The Warriors slipped up at home to Bradford Bulls, but a weakened Wolves side could not take advantage, going down 48-24 at Salford City Reds.

Riley continued: "We were hugely disappointed with the performance that we gave on Friday night. It was nowhere near the standards we've produced this year.

"There's a lot been said about the selections of Tony Smith but he's done it all year. I, for one, was sitting in the changing rooms still thinking that we were going to get the two points with the squad that we had out there.

"Credit to Salford, they played some excellent rugby and a good brand of rugby as well."

Riley, 24, has scored 18 tries in Super League this season and is third in the list of leading try scorers in 2012, behind Wigan's Josh Charnley (25) and Warrington team-mate Ryan Atkins (19).