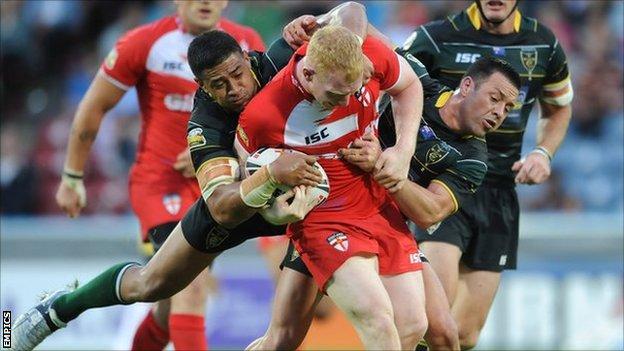 Jon Wilkin believes fans must put their club loyalties aside and support the national team after a crowd of just 7,865 saw England lose to the Exiles.

"There's an issue in our game about the strength of the clubs and the tribal mentality that our spectators have," Wilkin told BBC Radio Manchester.

"We need to start to break that down and get this England identity to mean something to the fans.

"The players and [coach] Steve McNamara are committed to getting that right."

The timing of the two-match International Origin series, at a crucial stage of the Super League season and on the eve of both Challenge Cup semi-finals, has drawn criticism.

Several players were withdrawn from Wednesday's second match at Huddersfield's Galpharm Stadium, which the with those key matches in mind.

Wigan scrum-half Thomas Leuluai suffered a broken leg in the first match at Langtree Park, which has ruled him out of the Warriors' semi-final against Leeds Rhinos on 14 July.

Wilkin, who captained England after Jamie Peacock's retirement from international rugby league, think the series has been beneficial for the players.

"I think we need the game to be well supported," said the St Helens forward. "I don't think the first game, because of the weather conditions, did us any favours.

"We aspire to have more people to come and watch an international rugby game.

"As players, we need exposure to that top international standard. I think there were only two penalties in the game, and that relentless game is in the style that international rugby is.

"The more exposure we can get to it, the better."