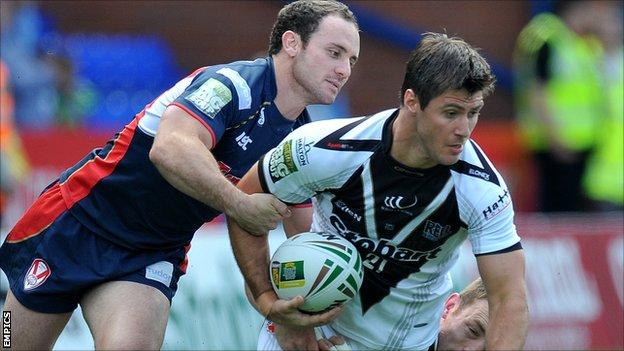 Denis Betts has said he understood a controversial decision from referee Robert Hicks that denied Widnes a victory over St Helens on Sunday.

after one of Rhys Hanbury's conversion attempts was ruled to have sailed wide of the posts.

"I believe it did go over," Vikings coach Betts told BBC Radio Merseyside.

"The referee might quote differently, but Rhys said he (Hicks) thought it went over. The linesmen put their flags down so he couldn't overrule them."

He added: "On that kick, we win the game, but the rules are the rules and the referee can't make that decision.

"We've seen a fantastic game and our changing room is a very disappointed changing room because [of] the amount of endeavour and work that they put in.

"We're in the entertainment business. We want people to come and watch us, and want to come back because they've had a great day. Winning and losing comes on the back of that."

The Vikings looked set to cause an upset against their local rivals, leading 23-18 in the closing minutes, thanks to a hat-trick of tries from winger Patrick Ah Van.

But a last-minute try from Josh Jones and a coolly-taken touchline conversion from Lee Gaskell was enough to give Saints a third win over Widnes this season.