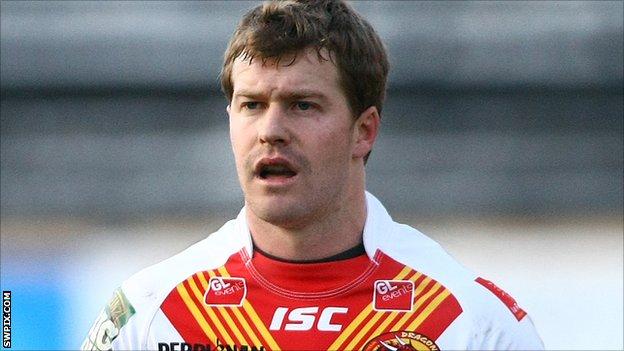 Catalan Dragons closed the gap on Super League leaders Wigan to four points with an eight-try 44-14 win against Hull FC at the Stade Gilbert Brutus.

Scott Dureau was the star, scoring two tries and kicking six goals from scrum-half, while Darryl Millard and Clint Greenshields scored a brace.

Hull recorded three tries, two for Tom Briscoe and one for Lee Crooks, while Joe Westerman kicked one goal.

The game was a rearranged fixture after a February postponement and the Dragons showed the sort of form that has seen them challenge the Super League's top sides.

However Hull got off to a great start as they took an early lead through Ben Crooks, but after it was largely all Catalans who ran in four tries before the half-time interval.

Hull could only muster a Tom Briscoe try in response to tries from Pryce, Millard and a Dureau brace.

After the break it took the home side just two minutes to extend the lead as Millard added his second of the evening after good work by Greenshields and Pryce.

Dureau added the goal to extend the lead further.

The Exiles half-back showed his ability to snipe shortly after when he intercepted on his own 10-metre line and raced away.

Tryscorer Briscoe managed to get back and force the half back into an offload that found Blanch, who got away to score.

Briscoe got his second with a slalom run and Westerman added his first goal from three attempts to make the score 32-14.

Greenshields sealed the win for Catalans with a superb try that saw Dureau put in a reverse kick-through to allow the full-back the chance to score next to the posts.

Dureau added the conversion, as he did for the eighth and last Catalan try from Greenshields.

"They were too big, too fast and two physical for us, it was men against boys at times,"

"It's the job we're in, the preparation with the staff was terrific, faultless, and we knew what we had to do.

"Scott Dureau got in off the back of a lot of quick play-the-balls, but their forward pack were all pretty good. I was confident we could get a result today if we did what we were meant to do."