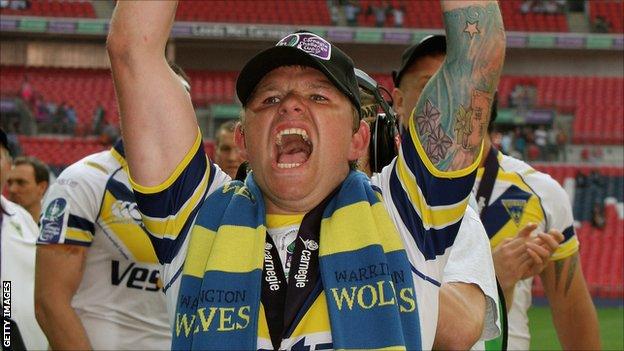 Lee Briers is an injury worry for Warrington, ahead of Sunday's Challenge Cup semi-final against Huddersfield.

The half-back, who has twice helped the Wire to cup successes, pulled out of the Super League win against Catalan Dragons with an Achilles problem.

Coach Tony Smith told BBC Radio Merseyside: "It's been playing up and some days he's better than others.

"We're trying to nurture him through training but some days it's not quite right. Monday was one of those days."

Briers started both of Warrington's Challenge Cup final wins in 2009 and 2010, winning the Lance Todd Trophy in the latter of those victories.

And the former Wales captain has played a big part in taking the Wolves up to second in Super League, heading into the final quarter of the regular season.

Without Briers, Warrington produced a stubborn display to see off Catalan at the Halliwell Jones Stadium.

Tries from Ben Westwood and Ryan Atkins were enough to close the gap between the Wire and Wigan at the top of the table to three points.

Smith, who saw his side come out on top in a physical encounter, believes his players are in good shape to reach a third Challenge Cup final in the space of four years.

"For what it's taken out of us physically, it will put a fair bit back in," he said. "I think it's actually good preparation when you have a good, hard, tough game.

"I don't think either team were at their best in terms of their attack, but in terms of commitment to the cause, I thought they were outstanding."