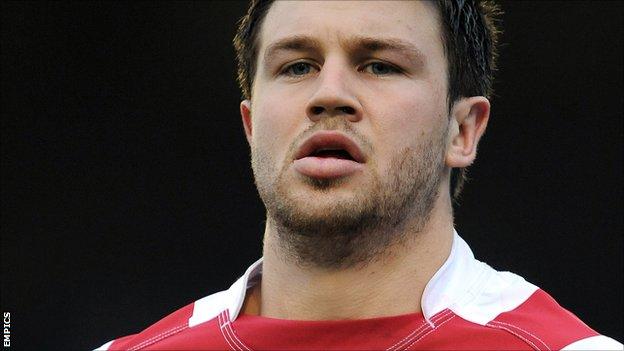 Darrell Goulding has said Wigan will be aiming to make their town proud by reaching a second consecutive Challenge Cup final on Saturday.

The Warriors face Leeds Rhinos at Huddersfield, in a repeat of last year's final which Wigan won 28-18. 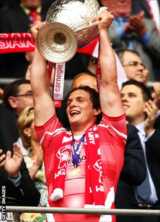 Wigan Warriors won the Challenge Cup for the first time in nine years last August, beating Leeds Rhinos 28-18 in the final at Wembley

"The Challenge Cup final is the biggest day in the rugby league calendar and it's massive for the town, not just the team," he told BBC Radio Manchester.

"It will make so many families and friends happy for Wigan to be there."

Wigan are three points clear at the top of Super League and have already beaten Leeds twice this season, including a 50-8 demolition at Headingley in June.

But after a difficult spell mid-way through the season, Wigan centre Goulding is aware of the Rhinos' recent improvement and knows they will be tough opponents.

"It's a massive game and to play Leeds, who have probably been the dominant force in Super League for a while, it's something that we're really looking forward to," he said.

"It doesn't really matter where they are in the league. They've got players that have done everything internationally and won everything domestically.

"They've got experience of big games so there's no doubt that Leeds will be at their best this weekend."

Wigan won the Challenge Cup for a record 18th time in 2011, defeating Leeds in the final at Wembley.

Forward Lee Mossop added: "Just to be part of that experience last year made me more hungry. This year, we're no different.

"We want to win everything and that starts with the Challenge Cup.

"It's not as if there are just two or three people that want this. It's a squad of 25 that set out at the start of the year.

"They all want it and it's an easy job getting up for games like this."

The England winger missed the win at Wakefield on Sunday with a calf problem he picked up while on international duty.

But new half-back Matty Smith will be unable to play, as he was signed from Salford City Reds after the registration period for the Challenge Cup closed.