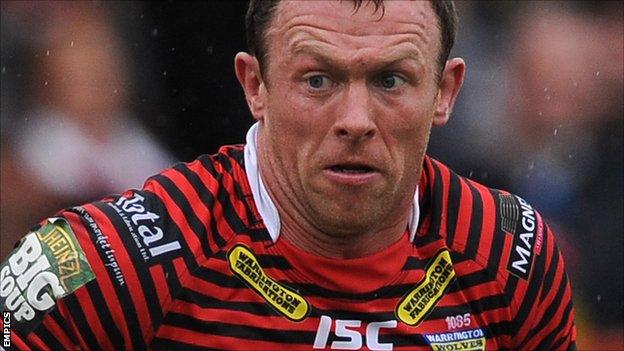 Warrington, the 2009 and 2010 Challenge Cup winners, face Huddersfield Giants at the Salford City Stadium on Sunday.

"I've been in quite a few finals and semi-finals so I know what they're about," he told BBC Radio Merseyside.

"You've got a feeling on the day and you know if the blokes next to you are ready. I've seen that we are switched on this week and it's a good sign."

Higham, 31, continued: "You ask any kid or any rugby league player and everybody wants to play at Wembley.

"Defeat in a semi-final is hard to take because you've been so close to getting to a major final and it's been taken away from you. Those are the ups and downs of sport.

"There's got to be a loser and, when you're in that position, it's not nice but I think it makes you stronger. It gives you that appetite to get back there again."

While Higham is a veteran of several semi-finals during his time with Leigh Centurions, St Helens, Wigan and Warrington, Stefan Ratchford is set to make his first final-four appearance.

The 23-year-old at the start of the season and believes Warrington's success so far in 2012 has vindicated his decision to move.

Ratchford said: "This was one of the main reasons why I chose to come to Warrington. They've been really successful in the Challenge Cup in the past few years.

"Growing up, you want to play professional rugby but you also want to win medals and trophies. We're 80 minutes away from being at Wembley.

"At Salford, we were always quite unfortunate that when we got to the quarter-finals, we drew one of the big boys and never quite got that stage."

Huddersfield's form has dipped alarmingly in the run-up to the semi-final, culminating in a 52-6 defeat at lowly Castleford on Sunday.

Ratchford continued: "It's not the Huddersfield you expect, especially the one last week against Castleford. They got beaten by 50-odd points which is a massive shock result for them.

"Their form isn't great coming into this game and it's not going to fill you with confidence.

"We know the type of team Huddersfield are and the players they've got in that squad.

"We're preparing for them to bring their 'A' game and put in a really top performance, so we've got to match that and better it."