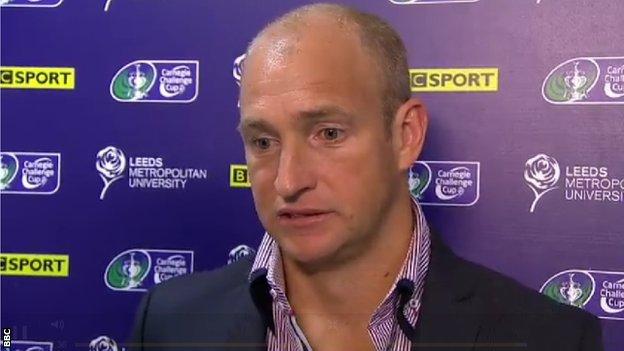 Brown, 38, was due to leave the Galpharm Stadium to take over at St Helens at the end of the campaign.

But a run of eight defeats in 10 league and cup matches has seen the club release him from his contract with immediate effect.

The Giants were knocked out of the Challenge Cup by Warrington in Sunday's second semi-final.

Huddersfield Giants general managing director Richard Thewlis said it was a decision the club felt they had to make.

"Only a couple of months ago we were top of the Super League table and we had huge aspirations, we still do," he told BBC Radio Leeds.

"We firmly believe in this squad and we think they have under-performed over the last two months.

"It had reached the stage where a lot our supporters were questioning us and we just thought that a change was needed. It's a culmination of results over the last couple of months."

The club had been top of Super League prior to Brown's announcement that he would be taking over at Saints next season.

He told the club website: "I leave sorry my time has ended earlier than probably anyone would have wished.

Huddersfield's results since Brown was appointed by Saints

"I have had a great time at the club and will cherish some superb memories and have made some lifelong friends amongst the players, coaches, staff and supporters.

"My support staff, led by Paul Anderson, have been wonderful and I wish them every success going forward, especially Paul who I hope will get the group to a strong finish to the season."

Brown took over at the Giants at the start of the 2009 season and led the club to the Challenge Cup final, where they were beaten by the Wolves, and a third-placed Super League finish.

He helped the club to fifth in his second season but defeat by St Helens in the play-off semi-final ended their hopes of a first Super League Grand Final.

Last season finished with further disappointment in the play-offs, this time at the hands of Warrington and Leeds.

This campaign was always scheduled to be the former St George Illawara coach's last with the team, as Anderson was named his successor in December.

Following Sunday's defeat Brown had said he was keen to finish the season with Huddersfield, despite the poor run of form.

"I'd like to finish the season here," he told BBC Radio Leeds.

"It's sad to end the Cup like this and our form in the league hasn't been great but hopefully we can improve on the desire we've shown today."