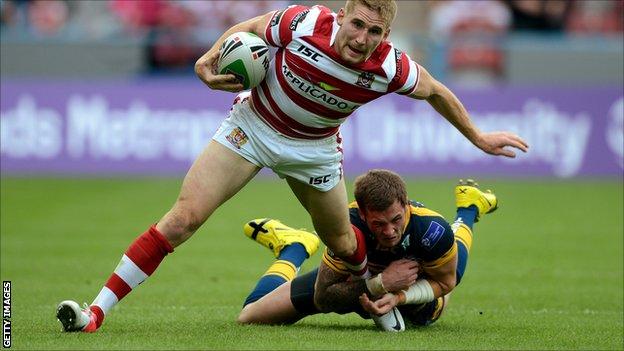 Failure to reach the Challenge Cup final will cost Wigan Warriors in the region of £250,000, chairman Ian Lenagan has told BBC Radio Manchester.

Wigan lost 39-28 to Leeds in their semi-final on Saturday, but Lenagan is confident the team will recover.

"We have a quality side who will bounce back from a disappointing defeat," he said. "We have the quality to win and we'll go on and win again.

"There's a Grand Final to get to and a league leader's trophy to win."

Lenagan continued: "You sit there and say you never want to feel like this again. That's the impact of losing in a semi-final when you've got a place at Wembley at stake.

"People like George Carmont, Jeff Lima and Brett Finch, who all want to play at Wembley before they go back to the NRL, you feel for them.

"But they, like anybody, have to take responsibility for a bad display. We did not play well."

Wigan, current leaders of Super League, started slowly at the Galpharm Stadium and conceded six tries in the first half.

"We weren't at our best, which is disappointing in a big game like that.

"We'll learn. We'll get better from that. There's still a lot of the season to go and a lot of important games still to play."