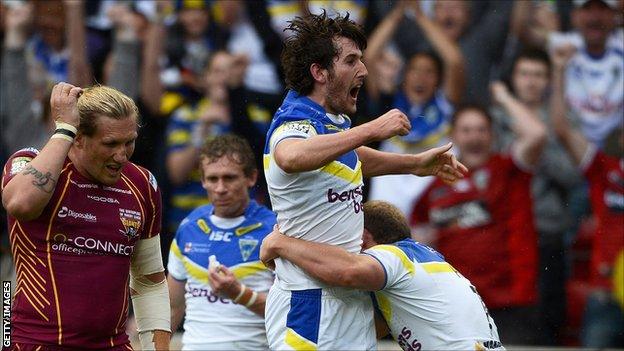 Chief executive Andy Gatcliffe must choose between watching Warrington in the Challenge Cup final or attending his son's wedding on the same day.

"I don't know what I'm going to do," Gatcliffe told BBC Radio Manchester. "It's a real dilemma, I can tell you."

The 33-6 semi-final win against Huddersfield Giants at Salford on Sunday kept hopes of a Super League and Challenge Cup double alive.

"Of course it's achievable, and do we want it? Of course we do," he added.

"We're going to aim for it. That's what we said right from the start of the season. We want to win them both and we're going to try and do it."

The Wire reached their third Challenge Cup final in four seasons on Sunday, and Tony Smith's side have been one of the most consistent sides in Super League this season, with only Wigan Warriors above them in the table.

"It was a great performance and we went about it in a really good manner," Wolves coach Smith told BBC Radio Merseyside. "Huddersfield came and played today, they put in their best performance for some time and they made us work for it.

"Even though we got out to a lead, I never thought we were comfortable until about 20 minutes to go.

"The final against Leeds has got the makings of a really good game. They like to play rugby league in a similar way to us. The ball will be thrown around and it will be an exciting game.

"They're two very well supported clubs so the atmosphere will be tremendous once again. Whichever team plays best on the day will take the spoils.

"We've got a few weeks to get ourselves ready for that. Hopefully both teams will be in their best form and we'll have a cracker of a game."