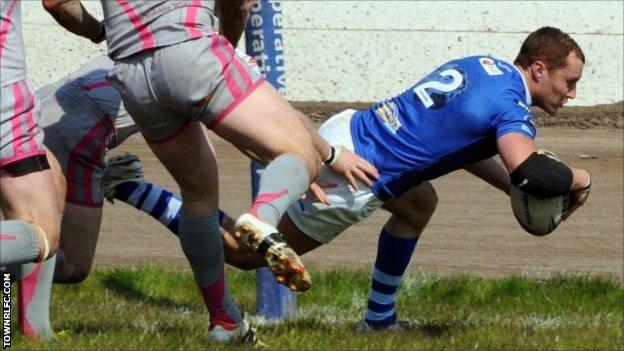 The 21-year-old extended his Championship One try tally to 19 with five in Town's 50-10 victory against South Wales on Sunday.

"He's big, he's strong, he's fast and he knows where the tryline is, and he loves scoring tries."

Millom-born Miller arrived at Derwent Park following a spell in Hull FC's under-20s side in July 2010, and scored 13 tries in 17 games in his first full campaign last term.

Meanwhile Town went top of the Championship One table on points difference with success at Derwent Park, following Barrow's defeat by Doncaster later in the day.

With ten tries scored thanks to Jarrad Stack, Mark Calderwood, Jamie Thackray and Graeme Mattinson, the 50-point return could prove crucial come the end of the campaign.

"It might come to points difference at the end of the day so when you're on top you need to rattle in a few points," Charlton said.

"That's what we did at the back end of the game."