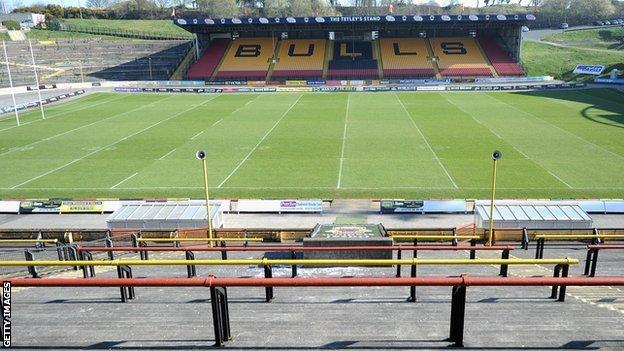 Bradford Bulls administrator Brendan Guilfoyle has confirmed he has received a bid for the club from the ABC consortium of local businessmen.

The bid for the club is conditional on the Rugby Football League allowing the club to continue in Super League and the new owners to buy back the ground.

Guilfoyle told BBC Look North: "The consortium put a bid to me which I will discuss with the RFL on Friday."

It is understood the RFL will not accept a conditional offer.

However, Guilfoyle added: "The best the RFL will get is a conditional bid.

"They have been very consistent with us so far and I just want favourable consideration.

"If this bid isn't accepted by them then this club will cease to exist and I will have failed."

RFL licensing director Blake Solly said on Saturday that the other 13 clubs in the top tier, who are to be consulted on the Bulls' future, are currently split over whether the Odsal team should be allowed to remain in Super League.

Guilfoyle, who extended the deadline for when the club needed to have found a buyer to 27 July last week, does not believe that any consortium will be willing to take the Bulls on as a Championship side.

"The consortium I'm dealing with won't move forward with the club in the second tier. It would be a totally different business model," he continued.

"I'm here to save the Bradford Bulls as a Super League club."

As part of the scheduled RFL meeting on Friday the Bulls are expected to be docked six points for entering administration.

That would move the Bulls out of the play-off positions, five points off eighth place.