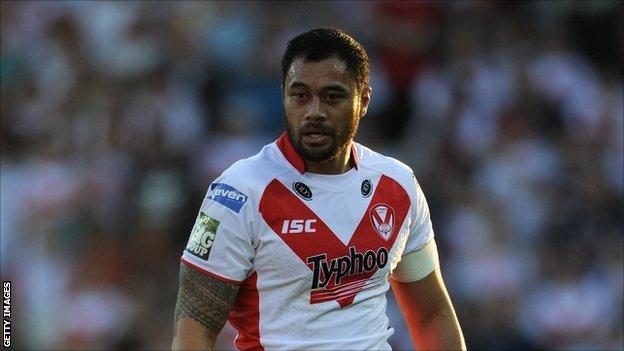 A gritty defensive effort saw St Helens survive the sending-off of Tony Puletua to become only the second away team to win at Catalans this season.

Vincent Duport put the Dragons ahead before Saints replied through Lance Hohaia and Francis Meli.

A Leon Pryce inside pass saw Sebastien Raguin put Catalans ahead at half-time.

Second-half tries by Chris Flannery and Tommy Makinson put Saints in front before the video referee denied what looked to be a good Catalan try.

The home side hit the front on six minutes through Duport, charging through three attempted tackles from a set scrum play.

Saints hit back through a superb solo try from Hohaia that saw the New Zealander step past a series of Catalan defenders.

The visitors then took the lead as Duport first knocked on to give St Helens great field position and then missed a tackle on Hohaia before the half-back sent out a long - and possibly forward - pass to put Meli in at the corner.

In a see-saw game, the home-side hit the front again with Raguin involved in the build up before taking Pryce's brilliant pass to score.

The second-half saw Jonny Lomax come up with a superb short ball to the charging Flannnery to touch-down behind the posts.

Saints continued to attack and went over again when a high kick by Hohaia was allowed to bounce and Makinson managed to juggle the ball before putting it down over the line with one hand.

There was still time for controversy as Catalans got over the line three times only to see efforts for Damien Cardace, Raguin and Cardace again ruled out by the officials.

The two Cardace efforts sandwiched Puletua's sending off for StHelens as the officials ruled he had attacked Gregory Mounis' head in the tackle.

"We are disappointed to lose, and for the first time in the league here at Brutus.

"The two points were pretty valuable for us tonight, but we're starting to compete, get into the arm wrestle and look to stay with the big sides.

"We need to keep playing like we have been over the last few weeks and the results will come. For me, this is the best that we are playing since I've been in charge."

"It's not revenge. We have nothing against Catalan or any of their staff or players, it was nice for us to get a win after we threw away two points at home against Catalan.

"We might not have been in our best form but we're picking up some points.